Dodgeville is the online home of Val Dodge of Toronto. Canada is home to at least one other Val Dodge. Even though it’s a big country, people confuse us all the time. Just to be clear, I’m not that Val Dodge; I’m the other one.

This blog is primarily about life in and around the city of Toronto as experienced on foot and by bike. Many of my other interests, from technology and woodworking to language and photography, will also be featured here occasionally. This is one of the few pictures from my youth where I’m actually wearing some clothes. It’s also almost forty years old and believe me, the yellowed old print has held up much better than I have.

I’m the moving force behind Finite Digital, and a freelance geek, writer, and photographer. I’m one of the founding members of Ward 29 Bikes, an advocacy group that’s hoping to turn Toronto’s Ward 29 into a cycling paradise.

I was the founding president of iComm, a non-profit Internet Service Provider for charities, non-profits, and community groups, and I sat on its board for six years until April 2003. I also served as the volunteer system administrator until January 2004 before moving on to other projects. During the period I was involved, iComm processed approximately 150 million emails and handled 750 million hits on the web server while delivering Internet services to almost 400 charities, non-profit organizations, and community groups on five continents. Unfortunately, iComm folded in July 2005.

I’ve had a varied career by some measures, and count glass cutter, gopher, tech support representative, company evangelist, researcher, system administrator, teacher, consultant, writer, photographer, programmer, project manager, development manager, and CTO among the many hats I’ve worn. I’ve worked in the private and public sector; for mature companies and startups; for businesses big and small; in offices and factories; for non-profits and screw-everything-and-everyone-except-profits; for myself and others; for happiness and money; for a pittance and riches; for sweat equity and bad debts; and downtown and in the suburbs. I like work that challenges me, is different every day, and gives me the freedom to apply my skills and abilities, which can be summed up as “I fix things.” I generally get that by being self-employed and working odd hours. 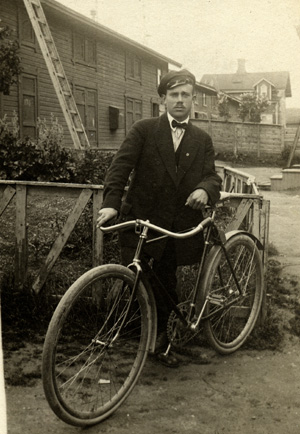 Within my family, I think I take most after my great-grandfather. He was an avid woodworker and accomplished handyman who gave me my first set of tools—a Handy Andy set with real saw, hammer, pliers, and more—when I was just 7 years old. The first present I ever remember giving to anyone was a circular saw we bought for him one Christmas in the 1970s.  I later inherited that saw and still count it among my tools. I also inherited his handmade workbench and all of his other tools and am only just learning how to use some of them more than 20 years later. I don’t know how much he enjoyed riding his bike, but I like to think that the joy of cycling also came to me through him. I only wish that I’d inherited his bike too, but I don’t think it made the voyage to Canada with him two years after this 1917 photo was taken.

I’ve been running the Cabal (TINC) since 1997. Like most cabals, we don’t really do much beyond practicing our secret handshake. Watch this space for further announcements.

No one ever asks me questions but as soon as someone starts, a list of frequently asked ones will appear here.

I strive to keep Dodgeville somewhat interesting without resorting to too much navel gazing or ego stroking. Unless otherwise noted, all content on this site is original, written, photographed, or otherwise created by me.  The randomly-selected banners at the top of each page are all photographs that I’ve taken. If you want to use any of my content for your own purposes, please ask first.

This blog is the fourth incarnation of Dodgeville, which has been around in one form or another since 1994 when men were men, women were women, and the Internet hadn’t yet been invented by Al Gore. The ‘net was a different place back then. Most people who had graphical web access (most people still didn’t) were browsing with NCSA Mosaic. There were no colours, tables, frames, or any kind of formatting really, available through HTML. We didn’t have Java, JavaScript, Flash, or plugins. There were fewer than 10,000 web sites compared to today’s 57.3 jillion. Netscape was a brand new company, still called Mosaic Communications, and their first browser was still in beta at verion 0.90. That browser was codenamed Mozilla, a name that geeks never abandoned and that would become official a few years later.  Apache’s first public version was months away. Google, Yahoo, AltaVista, Amazon, eBay, Excite, Deja News, Quake, Verisign, and ICANN didn’t exist. DEC and BBN did. Friendster, MySpace, and Classmates hadn’t yet come, never mind gone. Twitter was a verb and tweeting was something that birds did. I don’t think that Mark Zuckerberg had even been born yet, but my math could be a little fuzzy. Microsoft was still denying that the Internet existed at all. Windows users had to use third-party software to connect to the Internet. The essential Internet applications—Trumpet Winsock, Netscape Navigator, and Eudora—all fit onto a single floppy disk with room to spare. Indeed, people still used floppy disks. Windows 95 was still a year away. Bill Gates’s net worth was still counted in single-digit billions. Steve Jobs was working for a little computer company that he’d founded called…NeXT. The September that Never Ended was only a year old. Internex Online was still the biggest ISP in Toronto. I was still six months away from my first Internet-related job. There was no junk email. “Chat” meant IRC and IRC meant EFNet. You could still find useful Gopher servers. There was no such thing as a banner ad. High-speed Internet access came courtesy of a 28.8k modem.

Dodgeville wouldn’t be possible without the significant efforts of designers and programmers who have never even heard of it. The free and open source software stack starts with a LAMP platform running WordPress and using a modified Panorama theme. I trust the Spam Karma 2 plugin to manage comment spam: it captures about 10 spam comments an hour and only lets through one or two a month. Not bad at all. Galleries are created with Lightbox Gallery. The RSS feed is managed by OZH Better Feed. I don’t think I could count everyone who has contributed to my ability to convey words and pictures to you, so I’ll just thank them all. The Internet is built on your shoulders.