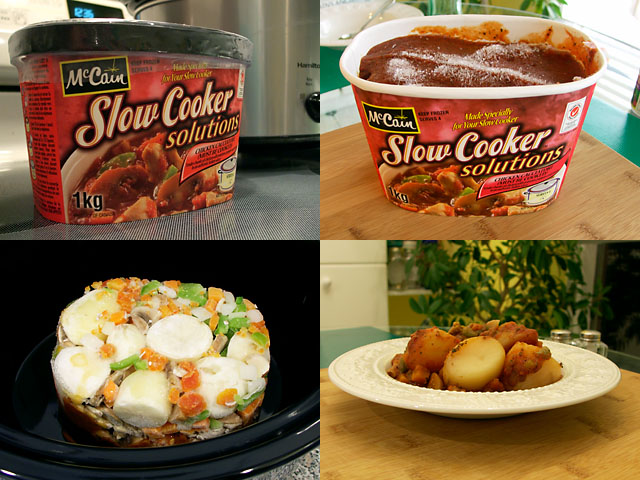 The strangest convenience food I’ve seen since aerosol cheese is McCain‘s latest entry in the frozen foods aisle, Slow Cooker Solutions. The selling point of most convenience foods is how quickly they can be prepared. As microwave ovens became popular in the 1980s, we gradually lost the ability to wait half an hour for dinner. Food preparation broke the 10-minute, 5-minute, and 2-minute barriers. And still it wasn’t fast enough. Only recently have we finally gotten foods ready in a mere five seconds, missing by a mere five seconds our collective dream of having food in our mouths the very instant we think about it.

And then along comes McCain, boasting that its new Slow Cooker Solutions require 8-10 hours for preparation. I would have loved to be a fly on the wall for that pitch meeting.

Those of us with slow cookers are familiar with this drill: cut up and measure the ingredients, dump it all in the pot, wait for 6 hours or so, then spoon out the deliciousness. I’ve got to admit that McCain has some huge cojones trying to convince anyone with a slow cooker that it could be any easier. So naturally, I couldn’t help but try out a Slow Cooker Solution. I’ll add that I bought this in mid-November, long before the annoying commercials started on TV.

The verdict? It’s surprisingly edible. I wouldn’t serve it to guests, but it’s better than most frozen food. The Chicken Cacciatore I tried for this experiment is notable for having only real ingredients on the label; none of the three varieties has any flavour, quite a rarity in the world of frozen convenience food.

Yet I doubt I’d buy it again. If I’m thinking far enough ahead that I’m using the slow cooker, I don’t really care if my preparation time is cut by five minutes. I almost never eat frozen convenience foods, and Slow Cooker Solutions just aren’t good or convenient enough to make me start.