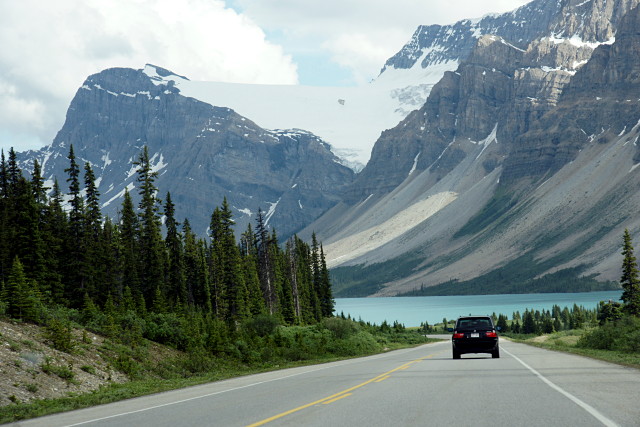 After our couple of days in and around Jasper, we headed south down the Icefields Parkway toward Lake Louise. I’ve been on some really nice drives, including the Pacific Coast Highway between San Francisco and Monterey, and the Icefields Parkway is by far the best I’ve done.  Rarely do I actually want to pull over at every single lookout, but they were hard to resist on this trip.

When you’re driving down the Icefields Parkway, you have to make a decision: are you driving to your destination on a rough schedule, or are you taking pictures of all of the interesting things along the way? You have to make this decision whenever and wherever you’re on vacation, but Jasper is so filled with photographic opportunity that the choice must be made over and over again. I sometimes need to remind myself that I’m on vacation and not on a photographic expedition hunting for the perfect exposure of the most awe-inspiring vista. I know that it can be boring (at best; supremely annoying at worst) to travel with someone who’s constantly setting up a tripod, micro-adjusting focus and frame, running around with a light meter, and waiting in one spot for ten minutes for the wind to die down or the light to be just so. This picture is a perfect example of the tension between enjoying a relaxing vacation and satisfying a photographic vision: 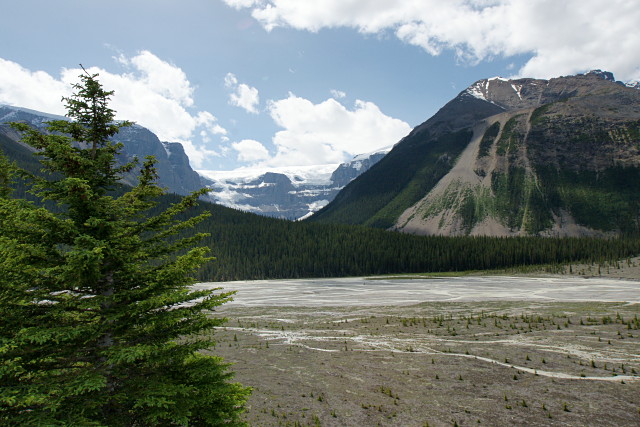 There was a very large raven sitting right on the top of that tree at the left. Several of them, in fact. One would fly away and another would take up the perch immediately afterward. So I got into position, tree in the foreground, mountain in the background, broad valley in between, a bright blue sky with fluffy white clouds filling in the blanks. Took a couple of test shots and selected my preferred exposure. But now that I was in place with the viewfinder pressed to my eye, finger on the shutter button, and everything framed perfectly, the ravens were all hanging out elsewhere: in the parking lot, in another tree, on the rocks, in the sky, anywhere but sitting on that damned tree. If I’d been here alone, I would have stood there and waited half an hour for a raven to return to the top of the tree and give me the picture I had already composed in my head. But looking over at Risa getting restless at the car, I knew my time was up. Fifteen minutes at a single lookout was enough. So there’s the picture, and not a raven in sight.

But that’s okay, because in Jasper, there’s always something else around the next corner. And Risa didn’t know it yet, but we were on a mission to trek out onto the Athabasca Glacier. All the whining in the world didn’t get me into one of those icemobiles when I was nine years old, but now that I’m old enough to pay my own way, nothing’s going to stop me. That’s the best part about growing up. 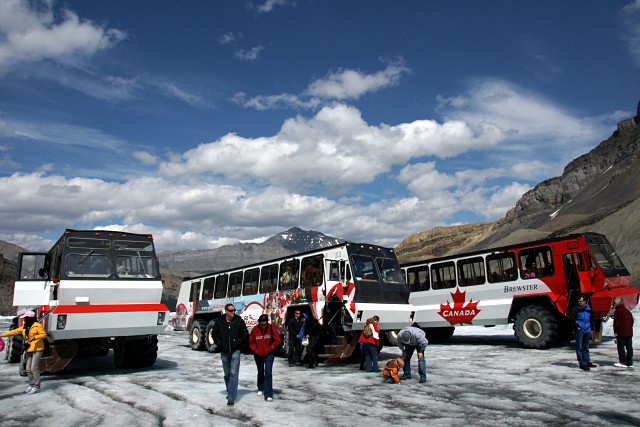 So onto the glacier we went. It was the perfect cap to an amazing drive through the mountains. There’s more about the glacier in the inevitable gallery at the end of this post. Suffice to say that it was impressive in every way.

Don’t tell Risa, but when we were planning our Western trip, I’d seriously considered trying to include some kind of cycling component between Jasper and Banff. If the Icefields Parkway is supposed to be a really nice drive, it should be an even better ride, no? Well, possibly. But passing dozens of riders on supported tours slowly grinding up one hill after another made me glad that I’d silently shelved the thought. Oh, I’m sure that I could have finished the ride, but I doubt that our marriage would have survived the 300 km trek.

On to the gallery and more observations. 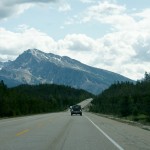 Setting out from Jasper in the late morning and heading south. This was just one of a jillion and a half mountains that would form the backdrop for virtually every second of the drive to Lake Louise. Each was more spectacular than the last. 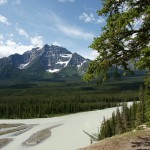 Scenic lookouts on the Icefields Parkway are a dime a dozen. If we'd stopped at every one, the drive would have taken several days instead of a few hours. Still, they're hard to resist. 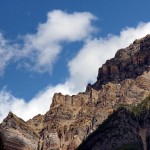 Sometimes I think that I'd like to try my hand at mountain climbing. But then I see mountains like this towering over me and I come to my senses. I'll stick to simple hiking trails and staircases. 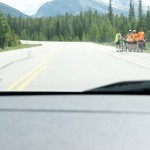 Oh, cyclists. If only you knew the hills that lay before you. 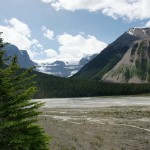 As I mentioned above, there's supposed to be a nice compliant raven sitting on top of that tree. I snapped a picture of him hanging out in the parking lot on my way back to the car; I may yet Photoshop him into the shot. 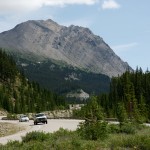 One of the problems with having so many mountains everywhere you look is that you really have no idea what they're all called. Some have signs pointing to them, some are prominent on maps, but most of them just fade into obscurity. I don't know the real name of this one, so I'll just call it Mount Wilbur. 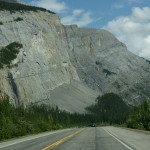 And here's Mount, uh, Bertha, looming over the road. 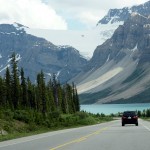 One of the hints that you're getting close to Lake Louise is that the lakes and rivers all start taking on this unreal green colour. 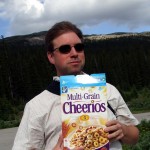 Cheerios are a man's best friend on the road. No stop at a lookout is complete without a handful. Or two. Of course, at the end of a long day in the car, you realize just how much fibre is in a box of Cheerios. Anyone remember that SNL commercial for "Colon Blow" cereal? 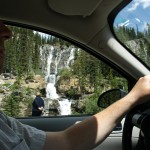 Eventually, Jasper wears you down and you realize that you'll never be able to visit, experience, or photograph the whole thing. What's that, another beautiful waterfall at the side of the road? Here honey, I'll open the window and slow down; just snap a picture while we drive by. Yes, it's beautiful, isn't it? But seriously, my eyes are bleeding from seeing so much today. We'll admire it when we get home. 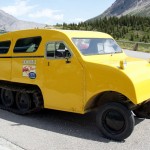 One of the original icemobiles is on display at the Icefield Visitors' Centre. 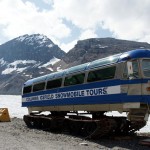 The second version of the icemobile was an intercity bus converted to ride on tracks. This is what I would have ridden in if we'd been able to go onto the glacier when I was a kid. 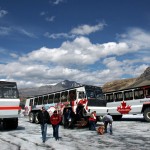 The large-tired beasts that that took us out onto the glacier. It's quite the setup here: an Ice Explorer arrives every fifteen minutes, all day long. It took about half an hour in total to travel the 8 km from the Visitors' Centre to the Ice Explorer parking lot at the top of the glacier. 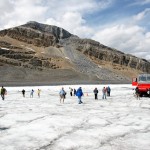 When you're standing on the glacier, it's incredibly difficult to understand the scale. Everything looks and feels so close to you, but the side of the glacier over there at the mountain is almost a kilometre away. 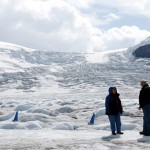 This gives a good close-up example of the scale of the glacier. That wall of ice at the back of the photo? It looks like it's just a few steps away and maybe ten metres high. In reality, it's close to 2 km away from the camera and something like 300 metres high. 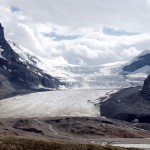 And here's a good example that shows the scale from afar. See that little rectangular spec of dust on the edge of the glacier at the left? It's about a fifth of the way from the left of the picture and a third of the way up from the bottom. Yeah, that one. That's one of those giant Ice Explorers. 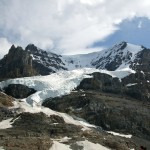 Not only are you standing on a glacier, but other glaciers fed by the Columbia Icefield loom over you. 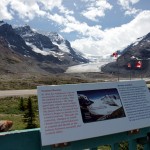 This information plaque at the visitors' centre shows the Athabasca Glacier as it appeared in 1844, against the modern backdrop. The walkway where this picture was taken sits atop the terminal moraine, the line of debris that marks the extent of the glacier at its fullest. It has since receded about 1.5 km and lost 50% of its volume. 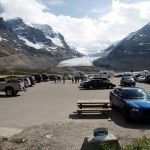 The marker in the foreground marks the 1844 edge of the glacier, when it was at its largest. 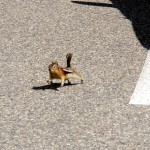 Hi chippy! This chipmunk in the parking lot of the Icefield Visitors' Centre was the last wildlife we saw in Jasper. 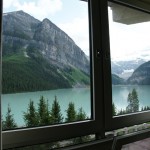 At the end of an exhausing and fulfilling day, we arrived at our humble hotel in Lake Louise. It was an okay view. More about that in the next post.