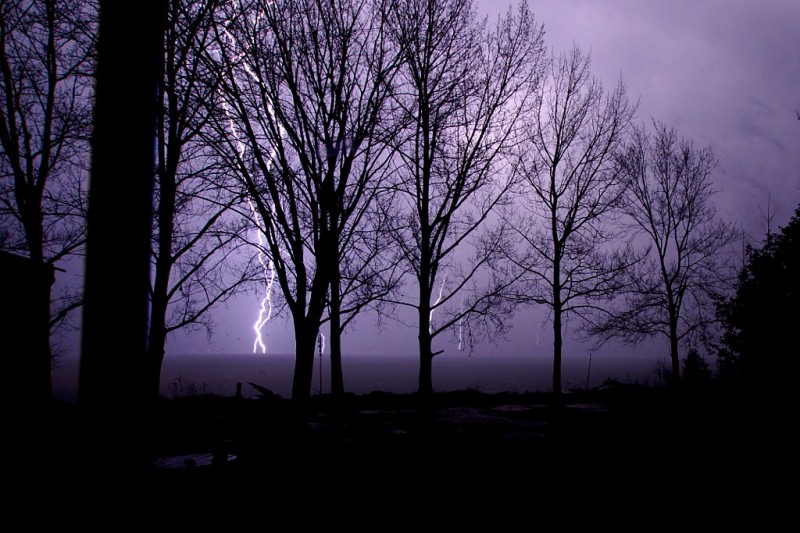 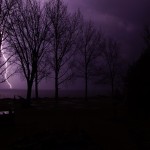 A single bolt of lightning strikes the lake a couple of kilometres away. 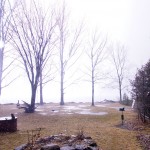 This was the closest, brightest, and loudest hit of the night. It was bright enough to completely blow out the picture and leave an afterimage of three lightning bolts burning on my eyes for a couple of minutes afterward. 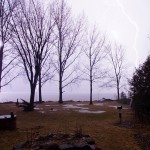 This is essentially the same as the previous picture, but the lightning was far enough away that it didn't overwhelm the sensor. 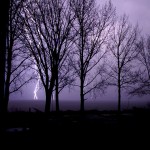 There were at least five simultaneous hits on the lake and one on the far shore in this picture, growing fainter and farther away from left to right. 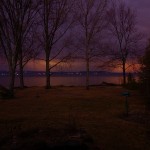 No individual bolts here, just a 2 a.m. landscape lit up by sheet lightning on all sides. 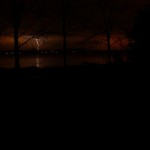 This picture is nothing special, but it was the first time that I was ever able to successfully take a picture of lightning instead of standing there waiting like an idiot after the storm had passed.


As I said, this was my first successful attempt at taking pictures of lightning. In all, I took about 140 frames over two and a half hours, about twenty of which resulted in half-decent exposures. I wouldn’t have tried to do it without a sturdy tripod, a bulb setting on the camera, a remote control to trip the shutter without touching the camera, and a wide-angle lens to capture a wide field of view without having to constantly reposition. I spent most of the time experimenting with different camera settings. I eventually found that these settings worked best for me:

Next time, I’m going to try to have two cameras going with different settings, and maybe with one positioned outside but within range of the wireless remote.