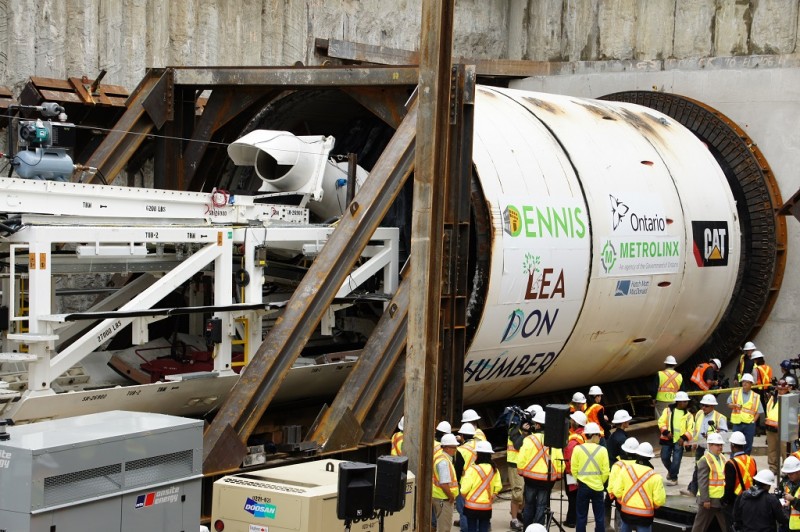 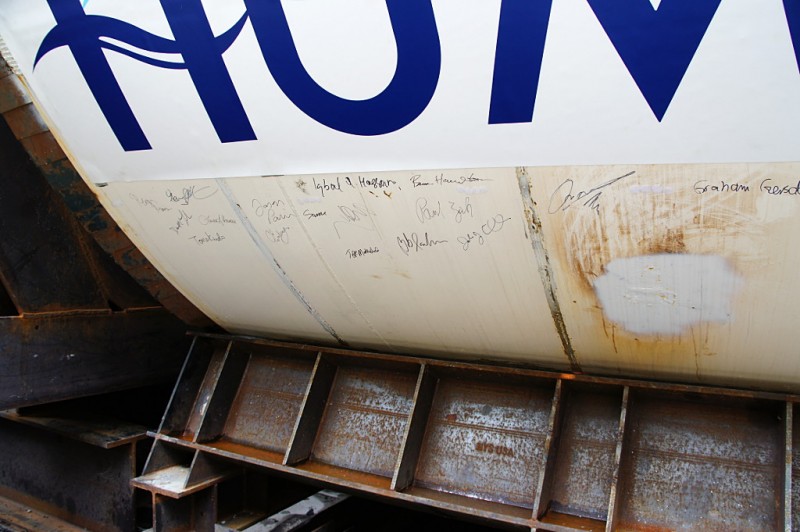 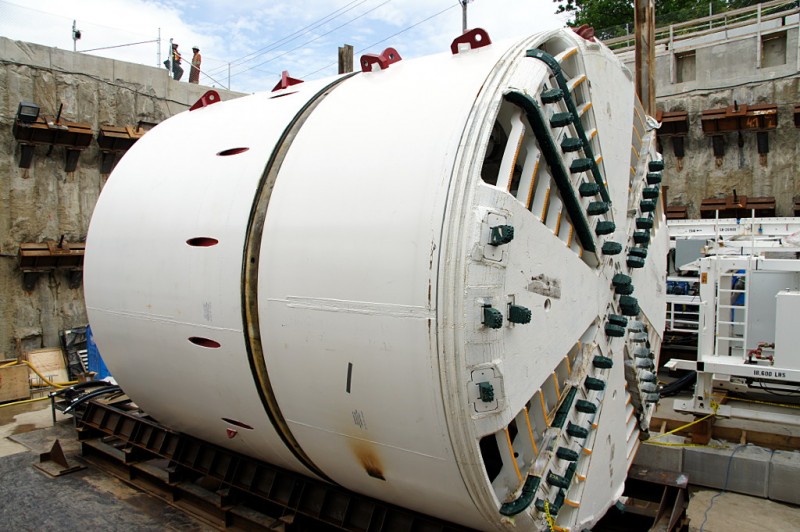 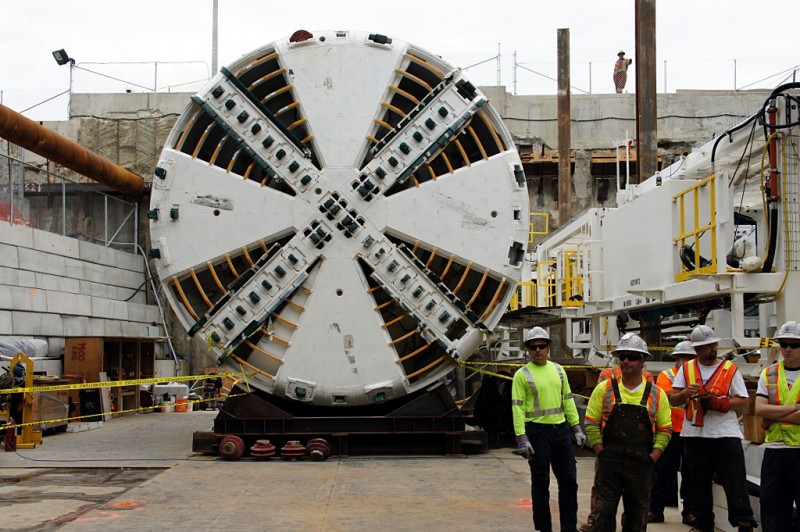 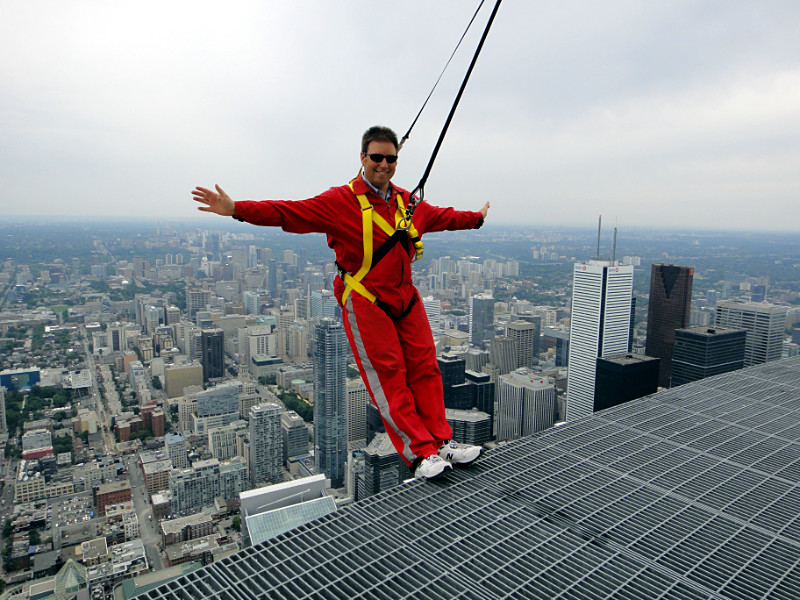 The rigging is checked twice by each of two different people. The harness is double-checked by each of three different people. Even your shoes are checked twice to make sure they’re on tight. You have to pass a breathalyzer test, get frisked with a metal detector, remove all jewellery and personal items, and be swabbed for explosives and narcotics. By the time you step outside onto the 1,168-foot-high walkway, you’d probably be in more imminent danger if you were swaying in a hammock reading a book. Yet casually leaning over the edge of the CN Tower requires your still-unconvinced brain to override your body’s instinctive resistance in order to push your centre of gravity out beyond the relative comfort of the walkway. After all, the next step down the staircase is a ten-second freefall away. By the time you’ve done it forwards and backwards and get around to posing for pictures, it’s almost second nature. Almost. 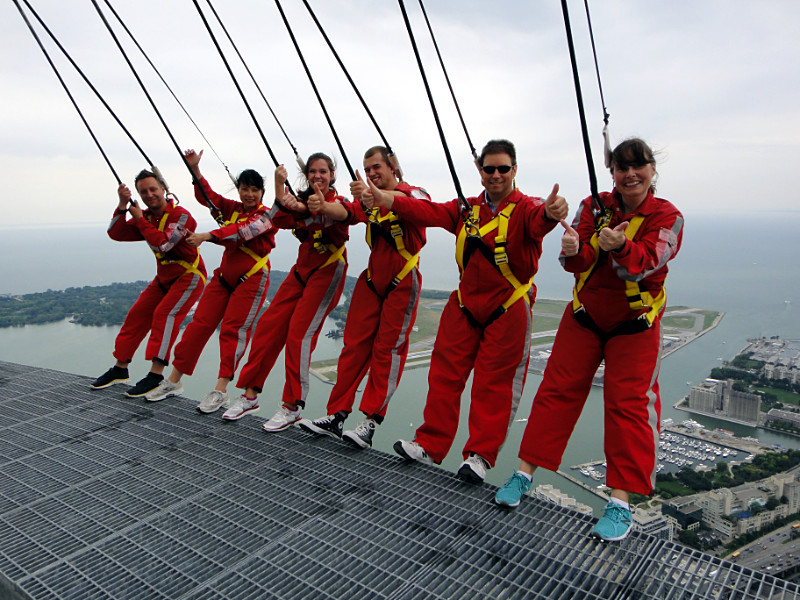 Right to left: Felicity, Val, and four other people with nothing to do on a Thursday afternoon.

So Felicity and I went on the CN Tower EdgeWalk last week. The walk itself takes about 30 minutes to circumnavigate the Tower on a 150-metre-long track, with nothing between you and your view of the city but the weather. The whole experience starts about 30-45 minutes before you step outside with the signing of the waiver, the donning of the red jumpsuit, and undergoing the aforementioned security and safety checks. Most of these preparations take place in a glassed-in room just off the gift shop at the base of the Tower, allowing a disbelieving public to watch six people calmly preparing for a short urban stroll. When the harnessed and jumpsuited walkers stride out of the prep room toward the elevator, staff and onlookers applaud and cheer. You can’t help but feel like a dorktastic version of the Mercury 7 strutting down the passage to the admiration of all and expectation of glory to come.

In addition to just walking around the deck and seeing the sights, the guide takes everyone through a series of exercises: stepping your toes over the edge, leaning backward, and leaning forward over the abyss. Then it’s picture time and you’re back inside almost before you know it. The funniest thing about it is that walking on the outside of the Tower quickly comes to seem so normal that all of the locals start doing what they usually do whenever they go up to the observation deck with out-of-town friends: they trace streets and scope landmarks, trying to pinpoint their houses somewhere below. I got as close as an apartment building on my street. The EdgeWalk is an expensive way to spend the afternoon, but it’s worth every loonie. I highly recommend it unless you’re completely jaded. And then I’d recommend it just to restore your sense of fun. 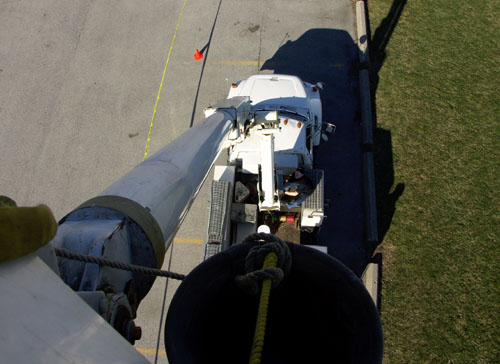 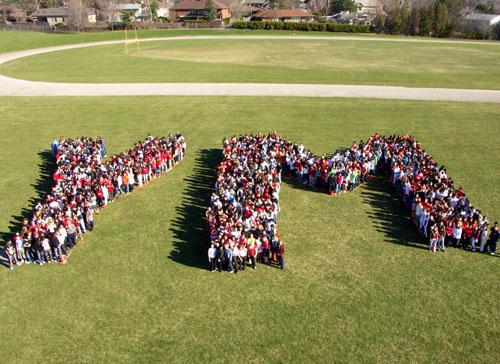 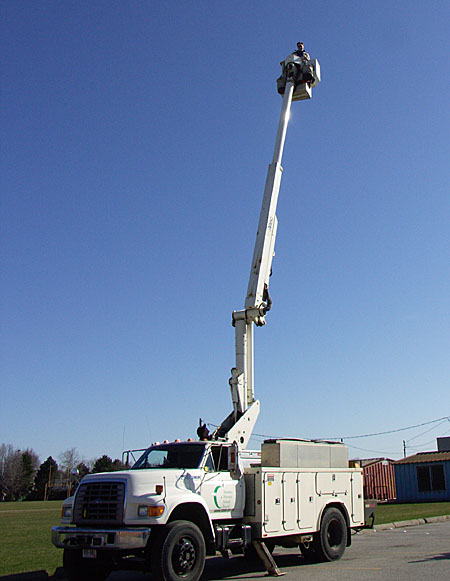