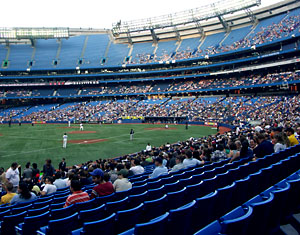 I posted the message below to a mailing list in 2005, after attending a Blue Jays game in which seemingly everything but the blue sky itself was brought to me by some sponsor or other. It was my first game since Rogers had taken over the SkyDome.

I went to a baseball game at the SkyDome for the first time in a couple of years last night and was struck immediately by how much the experience has changed. I felt like I was sitting in a giant commercial. First off was FedEx Delivers The Game, in which a FedEx van drove onto centre field and then off again without actually delivering anything at all. That was followed by the First Ball, brought to you by a Chevrolet Corvette which, again, drove onto centre field and then drove off again without actually dropping off the first ball.

The first pitch was thrown out by the star of an upcoming movie — a commercial for which was shown later, one of two commercials shown during the game. It was just like watching on TV. The “Game Host” was some guy from Rogers Television who spent the mid- and end-of-inning breaks strolling around the SkyDome running contests — The Staples contest, the Keg contest, the Klondike Ice Cream Bar contest, the Rogers High-Speed Internet contest, the FedEx contest, the Murderball poster contest, and on it went.

There were at least two contests where you had to text message your answer to a special number in order to win. At one point, I realized that the only things not brought to me by some corporate sponsor were the national anthems and, strangely enough, the former JumboTron, which is not the Sony JumboTron or the Panasonic StadiumVision or somesuch, but just “the big screen.”

At one point BJ Birdy Ace, the mascot, ran through the stands with his little uniformed helpers and tossed empty (I assume) FedEx shipping boxes to the most boisterous fans. And believe me, the lucky recipients looked ecstatic to take possession of their newfound, uh, cardboard. It’s possible that something was supposed to be inside, but I must have missed that part. I’d estimate that I saw the Rogers logo more times last night than I had in my entire lifetime before.

Oh yeah, the game wasn’t bad, but it detracted a bit from the commercial message.

This weekend, I went to my first Jays game since sitting inside that 3-hour commercial and can report that although things have improved marginally, the impression remains the same. Even the tribute paid to Jays great Dave Stieb was lessened by the reference to his sitting in the big easy chair in the “TD Canada Trust Comfort Zone.”

It’s more than a little sad that the singular experience of watching a baseball game unfold over 9 innings is slowly morphing into just another commercial/entertainment spectacle that has little to do with the game at hand.

Maybe I should start making my biennial baseball pilgrimmage to Christie Pits instead of the SkyDome.

One Reply to “Moneyball”