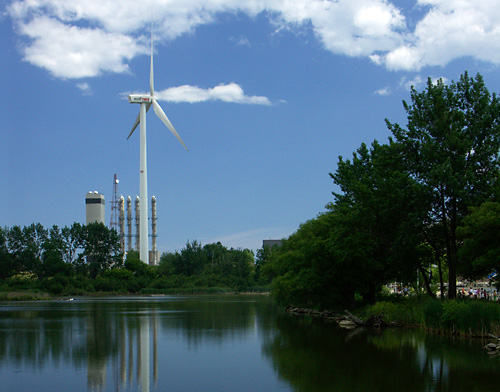 In a rare sign of semi-consciousness, the Greater Toronto Transportation Authority announced yesterday a $100 million region-wide initiative that included things like GO Transit improvements, bike lockers, bike racks on all local buses, and more. Naturally, none of this information appears yet on the GTTA’s “temporary” web site, so you’ll have to take my word for it. Oh, and they don’t have any funding for this vision, either. Still, it seems that a faint pulse yet beats in the Authority’s barely-warm body.

In reaction, Roger Anderson—Chair of Durham Region and past president of the Association of Municpalities of Ontario—is quoted in today’s Star as saying, “I understand the quick-win scenario, but if you’ve got $1.8 million to spend I think you can find something better to spend it on than bike racks.”

Maybe Chairman Anderson isn’t aware that his region is home to one of the best urban-parkland rides in the GTA in the form of the Pickering portion of the Waterfront Trail (the subject of an upcoming post on this site), including the grandly-named Millennium Square, where the picture at the top of this post was taken.

Maybe he’s not aware that Durham Council passed a resolution in 2004 to establish a regional Bicycle Plan, declaring in a subsequent newsletter that:

Cycling is a viable mode of transportation, which provides environmental, health and economic benefits. As a transportation alternative, particularly for short distance trips, cycling is environmentally friendly, promotes a more active lifestyle, requires less infrastructure than the automobile, and compliments the use of transit.

Maybe he’s not aware that the resulting study published in 2005 noted that, “There is some opportunity to increase “Bike-n-ride” behaviour by providing cycling-friendly public transit measures such as safe and secure bike parking and bike racks on buses.”

Maybe he’s not aware that some adults use bicycles for both recreation and transportation, even in Durham. Tellingly, a search for “bicycle” on Durham’s web site turns up a lot of links about kids (“Children like to […] try to balance on a 2-wheel bicycle”) and helmets (“Get into the helmet habit”), but nothing about bike lanes or other facilities other than the above-mentioned newsletter and study.

Maybe he’s not aware that he’s a dinosaur.