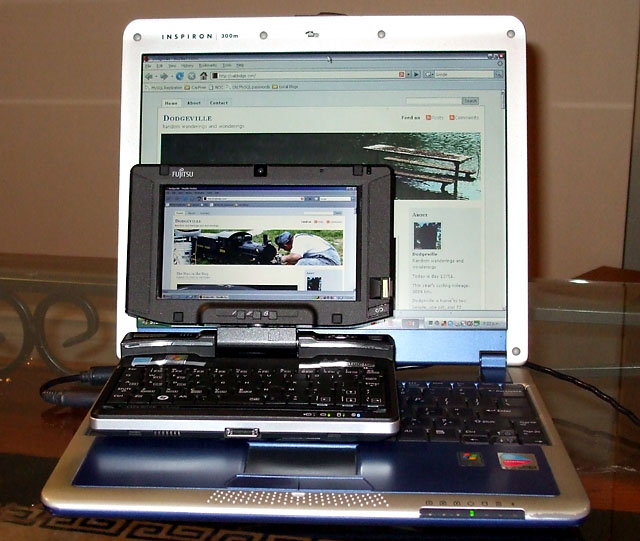 My newest toy tool arrived last week, a tiny Fujitsu Lifebook U810 ultra-portable computer. This is a full-fledged PC running Windows XP (and Linux by next week) that weighs only 1.5 lb and fits into an oversized pocket. It’s pictured above with my formerly tiny, and now suddenly enormous, 12″ laptop and below flipped over into tablet mode on a standard 8.5″ x 11″ sheet of paper. Fujitsu is not calling this an Ultra-Mobile PC (probably because the term conjures some negative memories among mobility-loving geeks) but that’s effectively what it is. 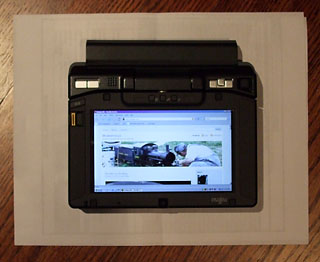 Its real purpose is to replace my aging HP Jornada 720 as my go-everywhere computer. The J720 set a virtually unbeatable standard for portable computers seven years ago. With a touch-typeable keyboard, built-in modem, dual expansion slots, a powerful (for the time) processor and almost too much (for the time) memory in a pocketable, one pound package, the Jornada 700 series heralded a bright future for portable computing. I took the 720 as my only computer on both business and camping trips as recently as 2003, which is saying a lot for a geek whose livelihood depends on having access to a computer most of the time.

In fact, the Jornada 720 was so unbeatable that both Microsoft and HP abandoned the handheld computer market shortly after it was introduced, focusing instead on the flashier (but ultimately less practical) Pocket PC. The J720’s successor, the Jornada 728, was unsupported virtually from the moment it hit the shelves.

I’ve been hunting for a worthy J720 replacement for at least three years now. Enter the Fujitsu U810. I’ve been playing working with it for almost a week now and couldn’t be happier. It fixes most of the problems I eventually had with the Jornada—including a relatively dim screen, unsupported software, and incompatibility with modern devices and software—and even takes care of a few issues I have with my regular laptop. Best of all, it fits easily into my man-purse and doesn’t appreciably increase the load of technology that I already carry around every day.

It’ll never be a desktop replacement, but it’s one fabulous travelling computer. My favourite feature so far? That would be the control-alt-delete button.