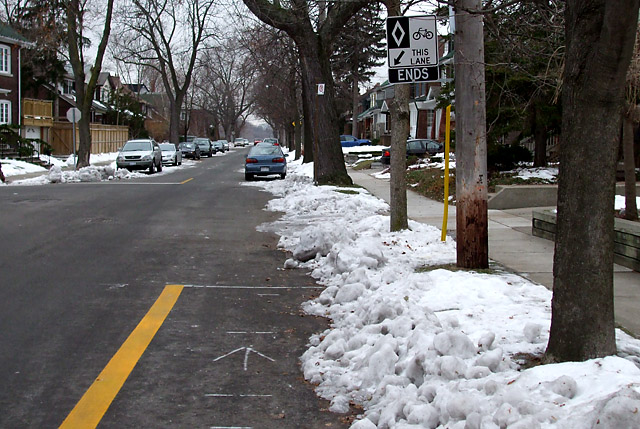 Three weeks. That’s how long it’s been since crews started work on the short (about 70 metres) contra-flow bike lane on Chester Hill Road between Cambridge and Broadview Avenues. I’ve been sitting on this post since they started work on the lane around November 20. Instead of celebrating its completion a day or two later, I’m still waiting. 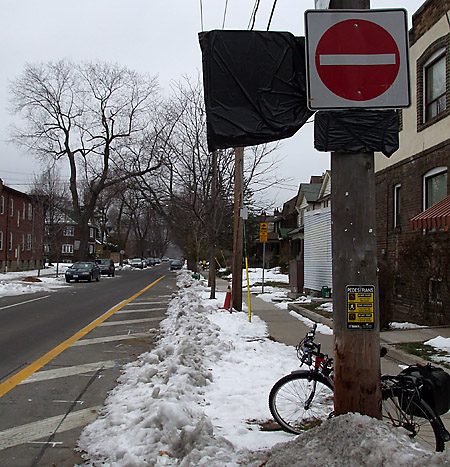 To date, the 70 metres of asphalt is only half painted: the solid yellow line separating the lane from oncoming traffic is done, but the diamond markings are still missing. In their place for about a third of the lane are diagonal stripes that prohibit traffic (including bikes) from using that portion of the road. Those were put in earlier this year when the City repainted the road to make left- and right-turn lanes.

Only one bike lane sign is up (ironically, the one that proclaims the end of the lane) so far. Another is still covered in plastic wrap, and at least two more signs are still missing: one “bicycles excepted” sign allowing bikes to turn onto the street from Broadview despite the right-turn prohibition, and a stop sign for bikes at Cambridge (which, I’m quite sure, all cyclists will obey).

The signs and paint merely formalize what has long been an informal and well-used route to the Bloor Viaduct for cyclists wishing to avoid the traffic on Broadview. Chester Hill is one-way for only a single very short block, presumably for the express purpose of preventing cars from taking this very same shortcut.

I’m not faulting Transportation Services for the snow and rain we’ve seen since the day after they started work on the lane, and I realize they can’t do much until the snow is gone. But it’s unacceptable that virtually all of the bike lane work in the city was left to the last three months of the year.

When Adrian Heaps made his ill-advised promise of 30 km of lanes this year, many cyclists were skeptical. Even so, the year’s piddly effort of 5 km or so is, in a word, pathetic. I don’t think anyone expected that the city could do any worse than the glacial pace of installations during the last couple of years, yet they managed handily. So now Heaps is promising 50 km for next year? Pardon my skepticism, but once bitten…

Council’s plan to kickstart the creation of 50 km of lanes next year by picking all the low-hanging fruit sounds good, but it means that they’re leaving the more difficult 400 km or so for the final four years. If they can only do 50 km of “easily-approved” lanes in a single year, what are the odds that they’d be able to do 100 km of “difficult” lanes each year for the four years after that? I believe the correct answer would be “Nil.”

I suppose that the Chester Hill bike lane is a perfect metaphor for the bike plan: a small but important piece of a larger puzzle that seems hopelessly stalled after a promising start. Well, there’s always next year.

One Reply to “Three weeks”