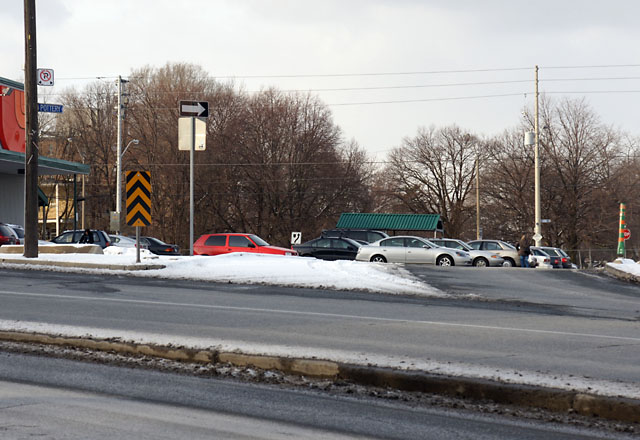 Frequent northbound travellers on the Bayview Extension have probably noticed the “Pottery Road” street sign pointing to a glorified supermarket driveway at the top of the hill, just south of Moore Avenue. Some may even have wondered how it relates to the more familiar street of the same name almost 1.5 kilometers to the south, winding up the valley wall to Broadview Avenue. The answer to this puzzle is that the two Pottery Roads used to be one, connecting Broadview and Moore Avenues, roughly following Cudmore Creek for much of its length.

Most of the road was abandoned when the Bayview Extension was constructed in the late 1950s. The section running from Broadview to Bayview was left mostly intact (and the top of it was later realigned to allow an easier climb out of the valley), as was a very short block at the northern end of the road, now flanked by parking lots for a supermarket and a bank.

What about the kilometer of the road that used to connect the two remaining sections? Unlike most abandoned roads that exist only for short stretches of their former selves, old Pottery Road is unique: its entire original route from Broadview to Moore is still open and can be hiked from beginning to end. Read on for the complete walking tour.

Notes: Following Pottery Road’s entire original route requires crossing busy roads mid-block. If you’re uncomfortable with this, you can always walk to one of the nearby intersections. There’s also one railway crossing which may or may not be legal to use: it’s at an old road allowance that is almost certainly still open, but that doesn’t mean that the crossing is still legal. The Cudmore Creek walk at Lost Rivers offers an alternate route for this section that skips the railway crossing, but takes you away from Pottery Road for a short distance. The walk also includes a couple of steep climbs or descents and some very rough ground; it can be done in running shoes, but you’d probably be happier wearing a pair of hiking boots with some ankle support. 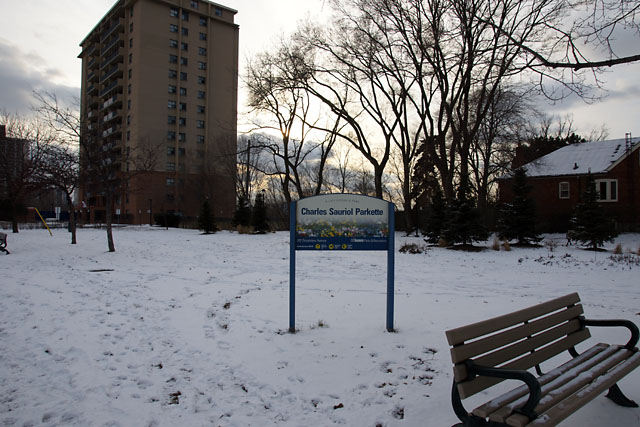 Start your walk at the sign (above) in the Charles Sauriol Parkette at the intersection of Hillside Drive and Broadview Avenue, a couple of hundred metres north of the current intersection of Broadview & Pottery Road. Pottery used to descend into the valley from here before it was moved south in the 1960s to make the hill more manageable for increased automobile traffic. Looking south in the parkette, you’ll notice a line of hydro poles going to the back of the park between the apartment building on the left and house on the right; they mark the former location of the road. Follow them down the hill to the current Pottery Road. Once at the road, you’ll need to cross to the path on the other side. Watch for traffic. 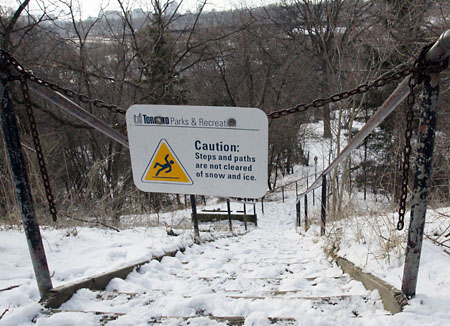 Walking down the path beside Pottery Road to the valley floor, you’ll pass Todmorden Mills on the left and Fantasy Farm on the right. Despite being part of the Don Valley Hills and Dales (map—PDF) Discovery Walk, the stairway (left) into Todmorden Mills is chained off for the season because the city of Toronto doesn’t believe in any kind of winter maintenance for anyone who doesn’t happen to be in a car. Fantasy Farm used to be a working farm—pictures in the Toronto Archives show cows grazing on the hillside above Pottery Road. 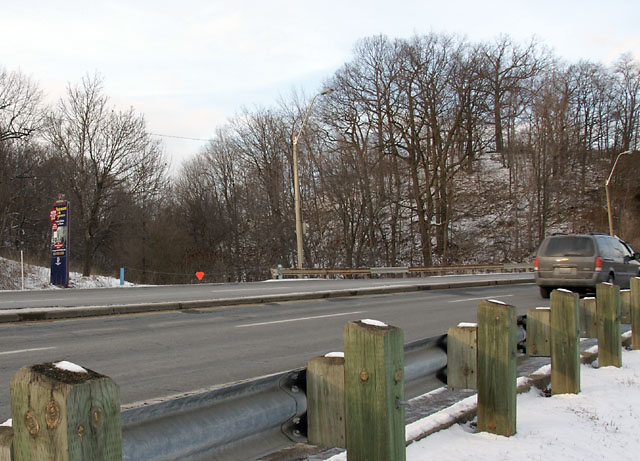 After you walk under the DVP, you’ll need to cross Pottery Road once more to get back to the north (or east, depending on how you’re orienting yourself) side to cross the bridge. Walk across the bridge and the railway tracks, but when the road ducks south to meet Bayview, you can just continue west, clambering up the embankment to Bayview. You should see the chained-off entrance to old Pottery Road (above) across the street. If you’re not comfortable crossing Bayview, cross at the intersection instead. Watch out for the old guy with the crutch. 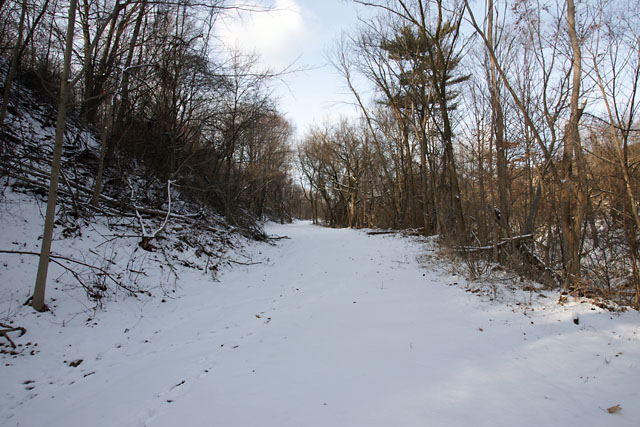 This portion is apparently used as an access road by Toronto Water and is maintained with a loose gravel surface. The wide roadway first swoops deeper down into the Don Valley, then heads northwest, climbing up toward the CP tracks. Cudmore Creek is on the right. 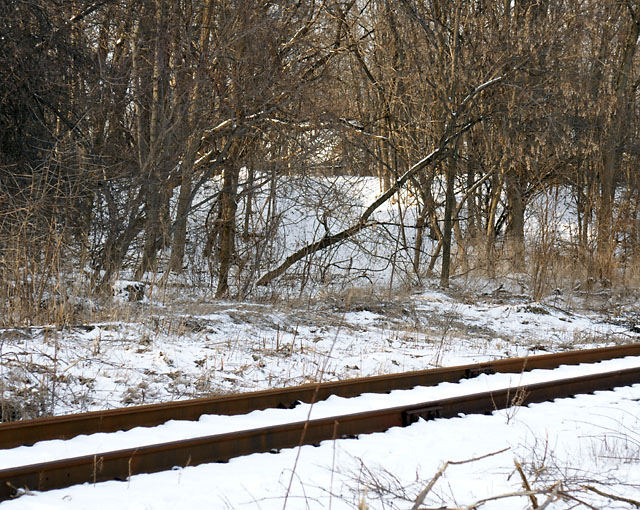 The old roadway is considerably more overgrown on the other side of the tracks (above), but the clear route through the center of the growth is still quite obvious, especially in the winter. Even 50 years of natural regeneration hasn’t managed to completely obscure the route. 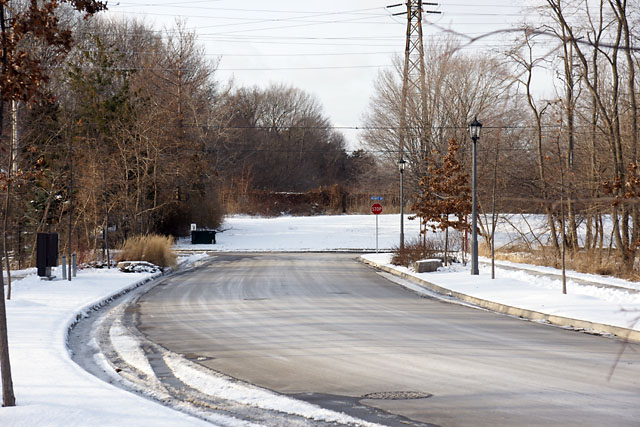 Scramble up the hill and you’ll see a short portion of the original alignment still in use as True Davidson Drive just south of Nesbitt Drive. This area was home to the infamous Bayview Ghost before its recent makeover into an entirely different kind of ghost development. This section continues across Nesbitt into a small park. When it’s not covered by snow, you can still see old bits of asphalt where the road used to be. At the far end is a fence that restricts access to the CN tracks. Getting around this obstruction is the only detour required on the tour. 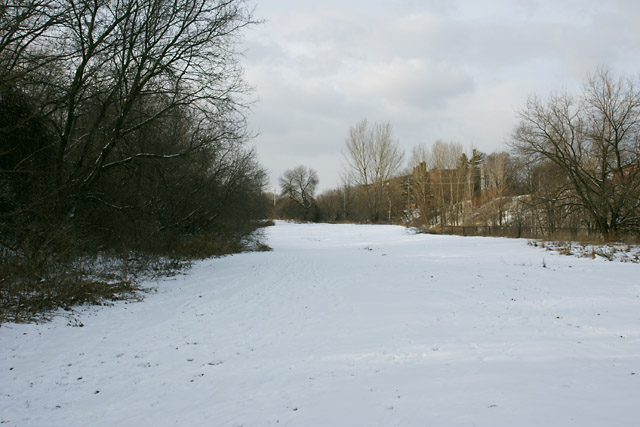 Go down to Bayview, walk north under the tracks, and then climb the stairway up to the wide flat section where Pottery Road used to run. There was still a lot of evidence of the old road along here as recently as a couple of years ago, but the asphalt has mostly disappeared now. From here, you can continue walking north to see the final block of Pottery Road still existing today, a half-hour walk away from its beginnings on the other side of the Don Valley.

Related: I’ve annotated a 1953 aerial photo of old Pottery Road from the Toronto Archives so that you can get your bearings. Pottery Road used to follow an even older route north of the CN tracks as seen in this 1947 aerial photo, turning west toward Bayview rather than proceeding north. Guess what? That alignment is still open too. I’ll leave it as an exercise for you to discover it for yourself.