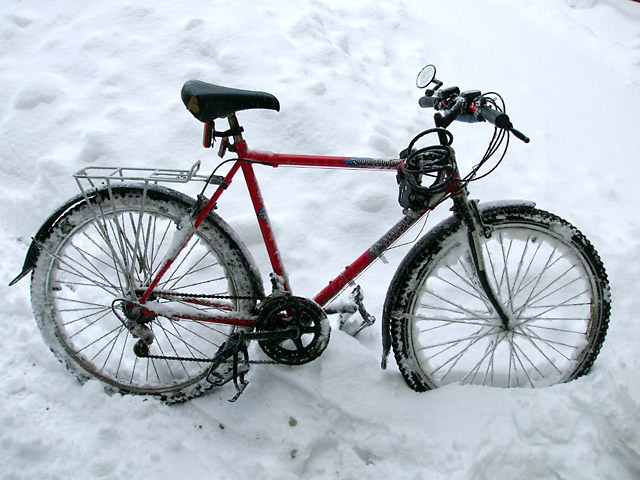 Yes, I went for a quick ride on Friday afternoon. It was after the worst of the storm had passed, but before it had stopped snowing and before most of the roads were cleared. Now that I’m working from home again, I haven’t had nearly as much opportunity to ride as I did earlier in the winter.

Despite the media spin, which always leans towards panic and gross exaggeration (with the occasional level-headed commentary masquerading as satire) when it comes to the weather, it was just not that bad a day. I went downtown for some shopping in the morning, ran a quick errand by bike in the afternoon, and then went up to North York for dinner. All in all, it was a pretty normal Friday for me. Oh, and I had to shovel a couple of times. Whoop-de-do.

Although the blowing snow wasn’t all that pleasant, it was certainly not the worst I’ve ever seen, nor was it anything that a warm coat and scarf or balaclava couldn’t deal with. It definitely wasn’t anything to get anxious and paranoid about. The sidewalks seemed well-used, the parks I passed through had obviously seen a day full of playful dogs, and I even encountered a couple of other cyclists while I was out. People generally seemed to be in good humour, taking it all in stride. Yet to read the paper or watch the news, you’d think that the sky had just fallen, that Toronto lay in ruin after the worst natural disaster in all of recorded history struck down the entire city.

Why the overreaction? It was hardly an isolated incident, either; the media regularly predicts mayhem and destruction any time a weather event is on the way, ready to menace the city. Yet from my hours tootling around the city by foot, bike, and subway on Friday, it seemed to me that the people most affected by the weather were those in cars. And most of those were people who simply didn’t use common sense. You know, like if the snow on the street is a foot deep and your car only has six inches of clearance, you’re probably not going to make it all the way down the block. If the roads are covered in snow, you’re probably going to need to give more room when you pass and slow down a bit when you turn. If you’re driving on summer tires and Pottery Road hasn’t been ploughed yet, find another, flatter, route. If you’re trying to zip through that left turn as the light is turning red, you’re probably going to slide into the curb.

Personally, I think that our winter traffic woes would be lessened considerably if winter tires were mandatory on all cars in Ontario being driven within two (three? five?) days of a snowfall. If you don’t want the expense, bother, or safety of winter tires, that’s fine; just leave your car at home a few days a year. If common sense doesn’t tell you to do it, maybe the law should.

One Reply to “What snow?”