Here’s an easy question for you trivia buffs: name a popular Toronto Maple Leafs hockey player in the 1960s who went on to found a donut shop that bears his name. Take your best guess, then read on for the answer. 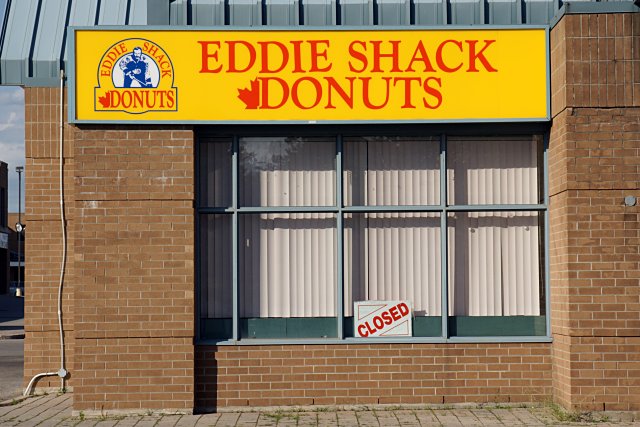 What, you were expecting someone else? And what is it with former Leafs and donuts, anyway? 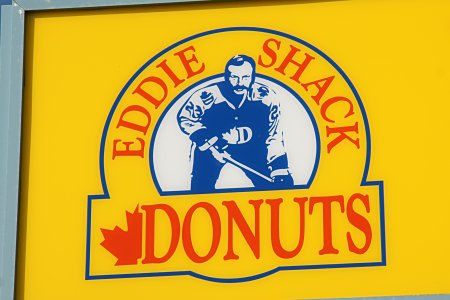 Peering into the window of this shop at Silvercreek Parkway and Woodlawn Road in Guelph, we couldn’t tell whether it was a going concern, preparing for its grand opening, or mopping up after its demise. Actually, it looked a lot like a furniture store was being set up inside, judging by the number of couches inside that were ensconced in shrink wrap.

In his 2001 book Food Nations: Selling Taste in Consumer Societies, Warren Belasco devoted an entire chapter to Tim, Eddie, and their donuts, comparing their playing careers to their doughy successes:

In 1994, former Toronto Maple Leaf Eddie Shack jumped on the donut and hockey player bandwagon, lending his name to a chain of donut shops on the outskirts of Toronto. […] More known for a string of comic commercials than any great contribution to patriotic mythmaking, Shack is a real character, much like the goofy uncle who shows up to family reunions and won’t stop talking. Nor is Shack a particularly admired donut impresario. […] “Tim Horton was an impressive kind of guy: short and stocky, brush cut, played for the Leafs,” sums up John Fitzsimmons of Hamilton, Ontario. “If they’d have had an Eddie Shack Donut back then, I’d have said, ‘I ain’t going in there, the guy’s a goof!’ But now he’s a legend. He was fun to watch, but [Eddie Shack] was no Tim Horton.”