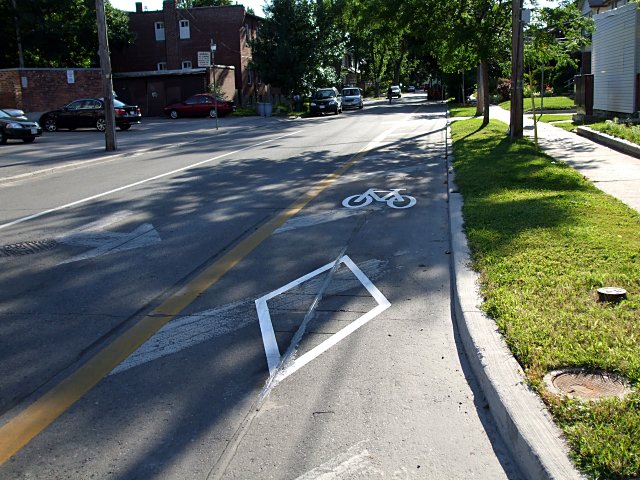 It’s been three months since any progress has been made on the semi-completed bike lane on Chester Hill Road between Broadview and Cambridge Avenues. Just when I was beginning to give up hope that work would ever resume on this project that started way back in November, the lane was finally painted with two diamond and bicycle stencils today. Some work remains to be done—the temporary stop sign at Cambridge needs to be replaced by a permanent sign, and the signs prohibiting turns onto Chester Hill from Broadview must be updated to allow cyclists to make the turn—but once again I have some hope that the lane will be finished before the end of time.

To recap the work done so far:

Late November: A 70 metre line of yellow paint goes down marking the lane. Two bike lane signs are attached to poles, but one of them remains covered by black plastic.

Mid-April: The second sign is uncovered and a temporary stop sign is erected at the Cambridge Avenue end of the lane, held up by three sandbags.

July: Two stencils are painted to mark the lane.

Surely there’s a joke in there somewhere.

At just 70 metres long, this is probably the city’s shortest bike lane. At close to eight months and counting since work started, it’s taking an unbelievably long time to slap down some paint and post some signs. Back in April, I wrote that the early spring progress on this lane was a good sign because the cynic in me had expected completion of the lane to “languish well into the summer.” Um…