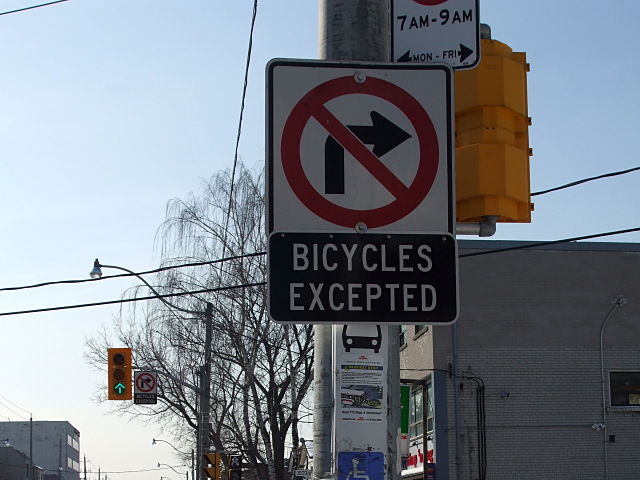 Some six months after the last bit of work done on the still-not-quite-finished bike lane on Chester Hill Road, a little more progress was made in January. And not just once, but work was done on at least two different occasions. Now that’s progress.

For those not familiar, Chester Hill has a 70 metre long contra-flow lane from Broadview Avenue to Cambridge Avenue. Yes, that’s 70 metres, not 700 metres or 7 km; not even as long as an Olympic sprint. The lane has been worked on in fits and starts since construction began in November 2007. I realize how terribly complex and difficult it can be to put up a few signs and paint a 70 metre long stripe down a quiet residential street, but surely 15 months (and counting) is a little long for the completion of such a short lane.

The temporary stop sign that was erected at the end of the lane last spring blew over in late December and was quickly buried under the snow banks that the city ploughs have been storing in the bike lane this winter. It seemed like a perfect metaphor for the bike lane (and the Bike Plan in general). But early January brought an unexpected sign of action on Chester Hill. Not only was the sign pulled out of the snow and re-erected, but it also got two fresh sandbags to hold it upright for another few months. Although the metaphor has changed a bit, it still seems appropriate.

A couple of weeks later in mid-January, another small item was knocked off the to-do list: there are now “bicycles excepted” signs hanging from the “no right turns” signs on Broadview at Chester Hill. Yes, well over a year after construction began, there’s finally some indication that cyclists are allowed to turn onto the road and actually ride the bike lane for the five seconds it takes to traverse the entire length.

As far as I can tell, some kind of work has been performed on the lane on exactly six days over the past 15 months: two in November 2007, one each in April and July last year, and now two in January 2009. At least they’re picking up the pace again.

I figure that all of the work required to complete this entire bike lane project from beginning to end would take one person no longer than five hours (including a lunch break). In fact, I’m quite confident that if the city dropped off paint, signs, and a ladder at my house, I could have done the entire thing on a Saturday afternoon. At this point, about 4 hours of the work is done. Another few weeks of hard work this coming spring, summer, and fall should be all that’s required to finish the job.

The sad thing is that as short as this lane is, it’s actually part of an important and already very popular connector to the Bloor Viaduct. A formal bike lane here is simply an acknowledgement of its long-time use as such. Too bad that it’s been so terribly neglected.

At this rate (70m in 18 months, assuming that Chester Hill is finished in May), it would take the city 345 years to finish the bike lane on Lawrence and 8,570 years to finish all of the lanes in the Bikeway Network. Here’s hoping that the Bike Plan is Y10K compliant.