The best thing about taking a vacation is coming back home. Don’t get me wrong, I always enjoy exploring beyond the normal boundaries of the Greater Dodgeville Area, but there’s just something about Toronto that really makes me appreciate coming back to it.

Risa and I were visiting family in Vancouver before scooting over to Jasper and Banff for a few days. It was a varied couple of weeks for transportation: in all, we flew, drove, walked, hiked, biked, and canoed, and rode the train, the bus, the icemobile, the ferry, and horses: something different almost every day.

This was the third time I’ve been to Vancouver in the last five years, and my first trip to Alberta since I was nine years old. I’ll spare you the typical vacation slideshow here, but I thought I’d share some random Dodgeville-style observations from each place we visited, starting with Vancouver. Banff and Jasper will follow in subsequent posts.

Before the gallery, a few non-photographic notes: 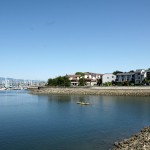 Leaning to kayak on a small bay on False Creek 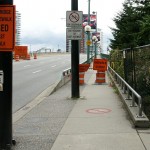 It seems like the entire city is under construction for the Olympics. Sidewalks and roads are closed everywhere and detours abound. 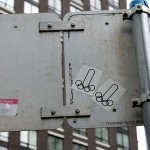 Not everyone is happy to be hosting the Olympics next year. The various protest stickers, signs, and graffiti seemed much more polite and muted than they would have been in Toronto. 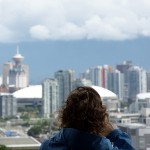 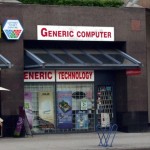 A generic name for a generic computer store. The name feels very 80s. 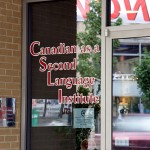 Canadian as a second language. Special discount for native English speakers. Seeing this sign made me think how strange it is that virtually every province and region east of Ontario has a very distinct accent, but everyone from Ontario clear through to the Pacific Coast sounds basically the same. Of course there are minor differences, but I’d have real trouble pinpointing a typical Vancouver or Calgary accent. 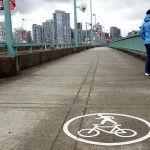 Cyclists must stand on their bikes. On the Cambie Street Bridge across False Creek, cyclists and pedestrians share the wide sidewalk. If this was in Toronto, there would be obstacles every 30 feet and cyclists would be repeatedly admonished to walk the entire way across. 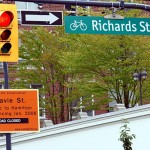 Many bike routes in Vancouver are marked right on the street signs. It seems much more efficient to do it this way rather than to have completely separate signage for bike routes. 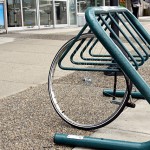 Toronto isn't the only city with a bike theft problem. Orphaned wheels and stripped frames were a pretty common sight around Vancouver. 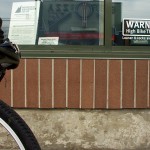 Now that's a bike-friendly business. The MEC in Vancouver offers loaner locks for cyclists who didn't bring their own.

See Toronto? It's really not that hard to put signal-activation buttons where cyclists can reach them. 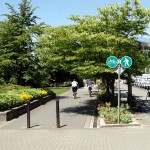 The seawall, which runs about 22 km along the waterfront, is Vancouver's big recreational path. For much of it, the cyclist and pedestrian paths are separated to reduce conflicts. This is similar to what we have in the eastern and western beaches and parts of the Humber in Toronto, but lack virtually everywhere else. It doesn't solve all conflicts, but I'd still like to see more of it. The seawall is the Vancouver equivalent of the Martin Goodman Trail, in that it's an extremely popular mixed-use recreational path. And like the Martin Goodman Trail, there are quite a few spandex-clad speed demons who try to use it as a training facility and get angry at all of the other people in their way. I really don't understand why people like that don't find a more appropriate route. 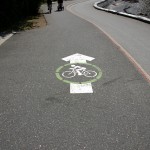 The weird thing about the seawall ride is that the bike path is one-way through the 10 km or so of Stanley Park. Want to ride the other way? You have to cut across Stanley Park and miss half the ride. 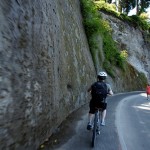 And here's one big reason why it's one-way: it can be very narrow in parts and there really isn't room for two bikes abreast, never mind two passing bikes. There's something very funny to a Torontonian along the path here: in a few sections where the bike path is obstructed or crosses a busy pedestrian path, you have to pass through cattle gates with signs telling cyclists to dismount and walk their bikes across. In Toronto, everyone just blows right past them and doesn't give them a second thought. In Vancouver, everyone dismounts and walks their bikes across. I have a thought about the reason for the different cyclist behaviour: in Toronto, we've become so overwhelmed by unnecessary warnings and prohibitions that we just ignore the vast majority of them. But in Vancouver there seem to be far fewer safety warnings so people are still in the habit of generally taking notice. 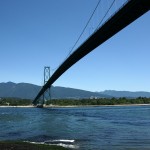 The Lions Gate Bridge crosses above the seawall and stretches from Stanley Park to North Vancouver. 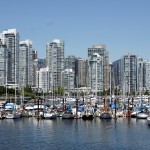 The north side of False Creek is a near-continuous wall of glassy condos with more under construction. I find most of these newer buildings to be as uninspired as any of the condos in Toronto. 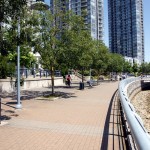 Despite the uninspired glass boxes, Vancouver has done a much better job of integrating buildings with the waterfront while maintaining full public access. It feels much more human and inviting at ground level than anything along the water in Toronto. In addition to the parks and marinas scattered along the shore, many buildings have retail, restaurants, and offices at ground level instead of merely showcasing overblown lobbies, parking lots, or blank walls. 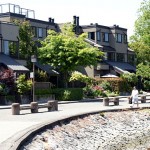 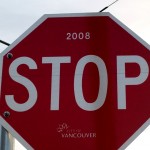 Vancouver has made one signage innovation since the last time we were here: many signs now have dates on them. This isn't exclusive to stop signs, but that's definitely where the dates are most conspicuous. The oldest date I saw was 2006, although at least one sign originates before then. 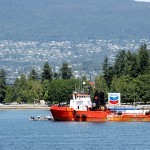 I'd hate to see the bill for filling up an SUB (Sport-Utility Boat) at a floating gas station. 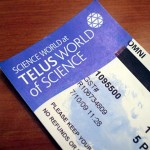 "Science World at Telus World of Science" is by far the dumbest name for an attraction that I've ever seen. 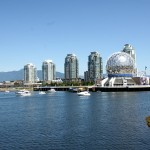 Although saddled with the dumbest name ever, Science World at the World of Science is still a looker more than twenty years after it was the centrepiece of Expo 86. 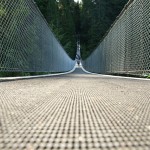 I'll save you the trouble of going to the Capilano Suspension Bridge: it's not worth the $30 admission. Yep, you read right: a $30 toll to walk across a 137-metre bridge. Taking a family of four across would set you back about $100. And while it's a nice bridge and all, the view just isn't all it's cracked up to be. 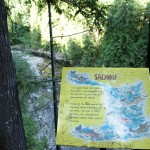 Having already paid my $30 (and glad that Risa wasn't with me so that I wasn't feeling twice as ripped off), I figured I'd take my time with the treetop tour and cliffhanger boardwalk on the other side of the bridge. What I saw was a good example of what's wrong with both the Capilano Suspension Bridge specifically and tourism in general. You walk along this boardwalk high above the river below and you read signs like this one, explaining what's in the river below. And this is what nature has been reduced to: something to be appreciated from afar via an interpretive sign. Nature should be experienced, not seen from behind a fence. 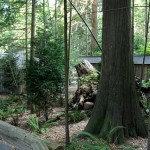 The boardwalk continues through the forest, which has been overly manicured and fenced off so that you can't get too close to it. A walk in the Don Valley gets you much closer to nature than this. 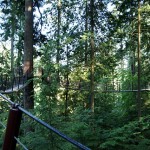 The treetop tour is better, but still felt underwhelming and artificial. In the end, I felt like I'd paid $30 to take a 20-minute walk in the woods, which is pretty awful value considering all of the good, free hiking available in the area. Maybe I was just missing something. I visited the Capilano Bridge after doing the Grouse Grind, which cost all of $5 for the gondola ride back down the mountain. Quite the contrast in both quality and cost on the same local bus route. 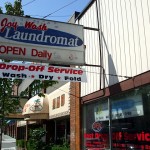 We did our mid-trip laundry at this laundromat on Cambie Street. Long before it was a laundromat, this store was a bakery in the 1940s, run by none other than Risa's grandmother. 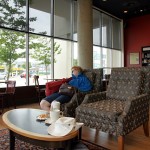 Four relentless days of travel around Vancouver left Risa wiped. She slept in this Starbucks for a while before we headed over to the train station to begin the next leg of our journey. 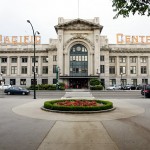 Pacific Central Station looks imposing. Like many train stations, it's in a neighbourhood that's been bypassed by our car- and plane-obsessed travel culture. Still, gentrification is steadily approaching and is within a few blocks of the station. It's only a matter of time before it's smack dab in the middle of condoville. 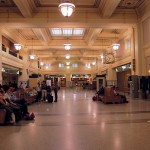 The inside of Pacific Central Station is quite elegant, but lacks the grandeur of Union Station's great hall back here in Toronto. It could use a bit of an update and some more traffic. From here, we'll be hopping on the VIA train for an 18-hour ride to Jasper.

One Reply to “Dodgeville annexes Vancouver”