Risa and I are on vacation out west. I used the occasion to climb Grouse Mountain, one of the peaks overlooking Vancouver. The interesting thing about Grouse Mountain is that you can take public transit to it: a quick ferry and bus ride  from downtown Vancouver gets you right to the base of the mountain for $3.75. Ah, for TTC and GO service like this to some of Toronto’s far-flung attractions. Grouse Mountain isn’t huge by mountain standards, but it’s still a lot bigger than anything I’ve climbed in Toronto. I’ll have more random thoughts about Vancouver in a later post or two, but for now, here’s a gallery of my climb up the Grouse Grind. 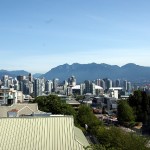 My nemesis stands in the distance. It doesn't look so bad from here. 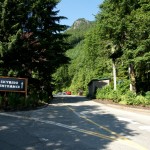 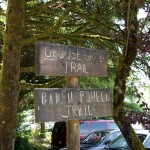 The Grouse Grind shares its trailhead with the Baden-Powell Trail that skirts the mountain but doesn't go all the way up. 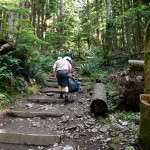 The Grind is basically a long rustic staircase up the side of the mountain. It doesn't seem so hard at first. 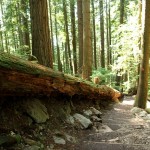 The odd thing about the Grouse Grind is that there isn't really a lot of scenery. Don't get me wrong, it looks gorgeous. But the forest is dense enough that you usually won't see much of a view other than what's directly ahead of or behind you on the trail. 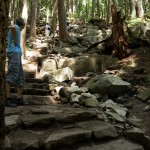 All the way up, you pass people who are pausing for breath, a snack, or some pictures. On a sunny and hot Friday afternoon, the trail was quite crowded. There were only a couple of occasions when I couldn't see at least a few people in front of and behind me. 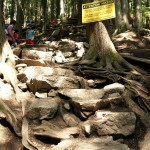 The trail has signs each 1/4 of the way up. Reaching the first quarter marker after 25 minutes of steady climbing and heavy breathing both deflated me and gave me determination to continue. The yellow sign warns that the remainder of the trail ahead is steep and difficult, as if the trail behind had been a walk in the park. 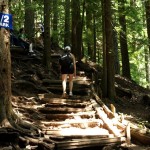 I reached the halfway mark in a surprisingly quick 20 minutes. It made me think that the rest of the climb would be easy. 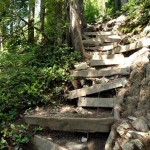 Steep staircases like this are quite common on the trail. Frequent switchbacks meant that you could be two linear feet away from somebody else on the trail, but they could be ten feet above you. 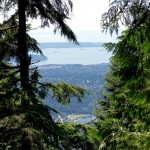 A rare hole in the tree cover allows a glimpse of the horizon. After an hour of climbing, it's nice to be able to see the progress you've made. Here, you can see three freighters anchored far below in English Bay. 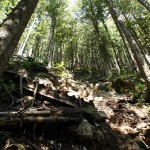 The relentless tree cover helps to make the trail seem more daunting, yet friendlier at the same time. 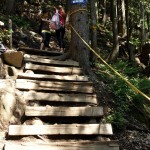 The three-quarter mark comes at the top of a staircase, a tough 30 minutes after the last marker. Assistance ropes are more common through this stretch of trail. 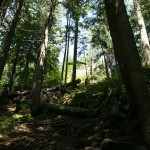 A glimpse of blue skies ahead means that we're approaching the end of the trail. 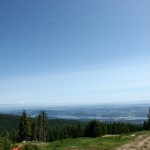 We're finally at the top and receive the reward for our hard work: looking down on Vancouver in the distance. 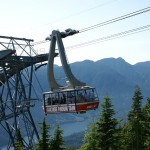 Wait a minute, you mean there's another way up this mountain? Why didn't someone tell me before I climbed the trail? 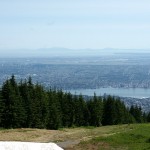 The top of the mountain is packed with touristy things: a birds of prey demonstration, a lumberjack show, and ziplines, among others. And if you know me at all, you know that I watched the lumberjack show (exactly the same as it was the last time I was here three years ago, but still fun) and then went off exploring other trails away from the crowds. This is one of the ski runs. 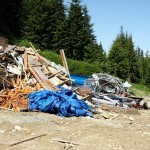 No matter where you are, service roads always seem to lead to rubbish piles. 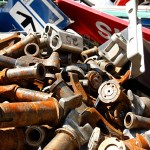 This service road had a little dump area with various bits and pieces of ski hill infrastructure scattered about in piles. 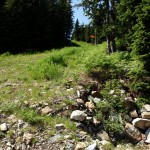 Ski runs look so inviting in the summer. 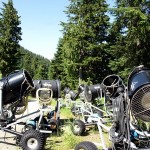 The snow making machines sit off to the side of the road, awaiting another season of action in a few months. 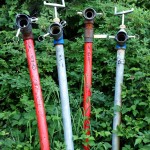 Water for the snow machines has to come from somewhere. 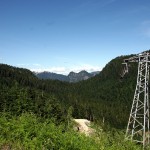 This disused ski lift would bring riders back up from the base of the two ski runs I've been following. 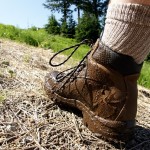 My feet have really been attracted to muddy bogs over the last few weeks. This was the second time recently that I've sunk down to my ankles in mud while traversing otherwise dry ground. At least I was wearing boots this time. I guess that's my cue to head home. 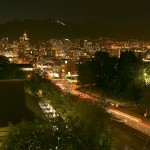 I conquered you today, Mr. Mountain, but no hard feelings. Sleep well.