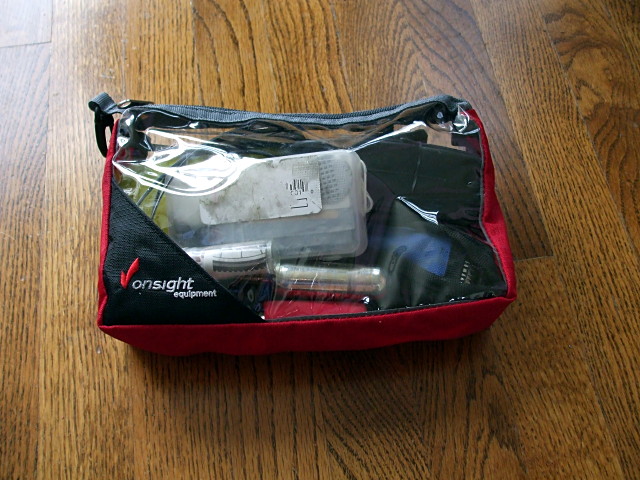 This is the kit for my mountain bike, which is used almost exclusively to get me to various destinations outside of the city. The bike carries me both on- and off-road as far as Niagara Falls, Hamilton, Lake Simcoe, Port Perry, and Whitby, and I like having enough with me to get me at least as far as the nearest GO station. The entire kit weighs a touch less than 3 lb. Some would scoff at carrying the extra weight, but it provides me with peace of mind and the weight penalty is far less than the water and food I carry for a typical day-long ride. This is way more than I’d want to carry for short rides in the city, but I wouldn’t head into the countryside without it. 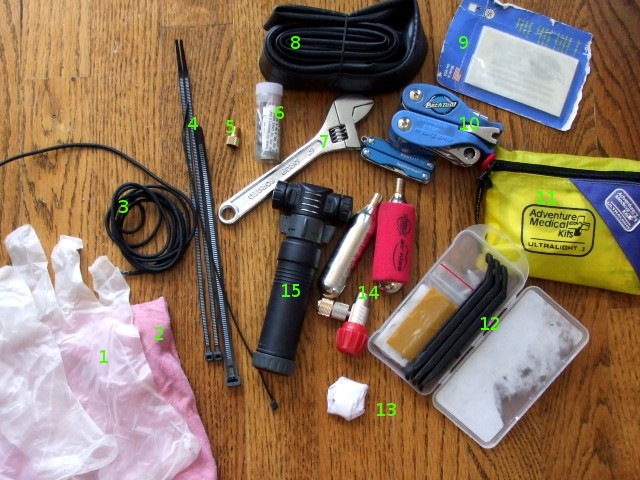 What’s not in my kit? The most glaring omission I can think of  is spare derailleur and brake cables. I break 2-3 cables every year, but I can always limp home with one brake or three gears. Even if I did carry cables with me, I’d hate to try to tune a rear derailleur with a new cable at the side of the road anyway. Brakes would be easier.

My commuting kit is much lighter: its functionality is limited to just fixing flat tires since my commute never takes me more than about a 10-minute walk from the subway. The kit for my road bike is somewhere between these two: lighter than the mountain bike kit but with similar breadth.

Of all of the breakdowns I’ve had over the years, only one would be beyond fixing with my current kit: while riding to work last winter, I had some kind of problem with my hub where my pedals were spinning freely but not transferring any power to the rear wheel. Think of what it’s like when your chain falls off, but everything was properly connected. I ended up schluffing the last kilometre to work and dropping my bike at the shop near the office. But in an emergency, I probably could have zip tied the cassette to the rear wheel, turning the bike into a fixie for the rest of the ride home. I would have had to get underway gingerly and probably walk up hills, but it would have been better than nothing.

A few tips if you’re building your own kit: