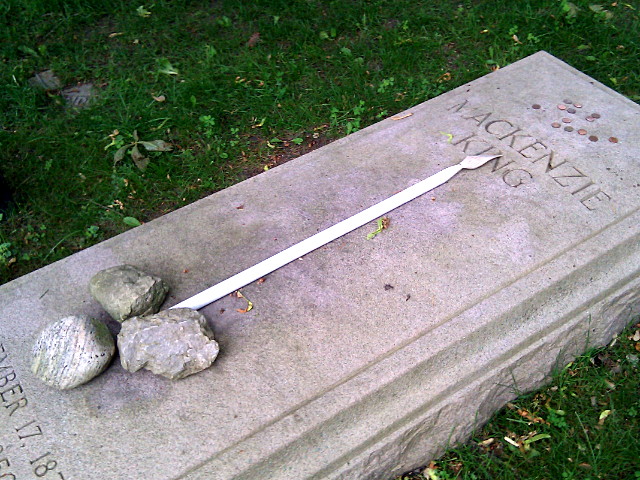 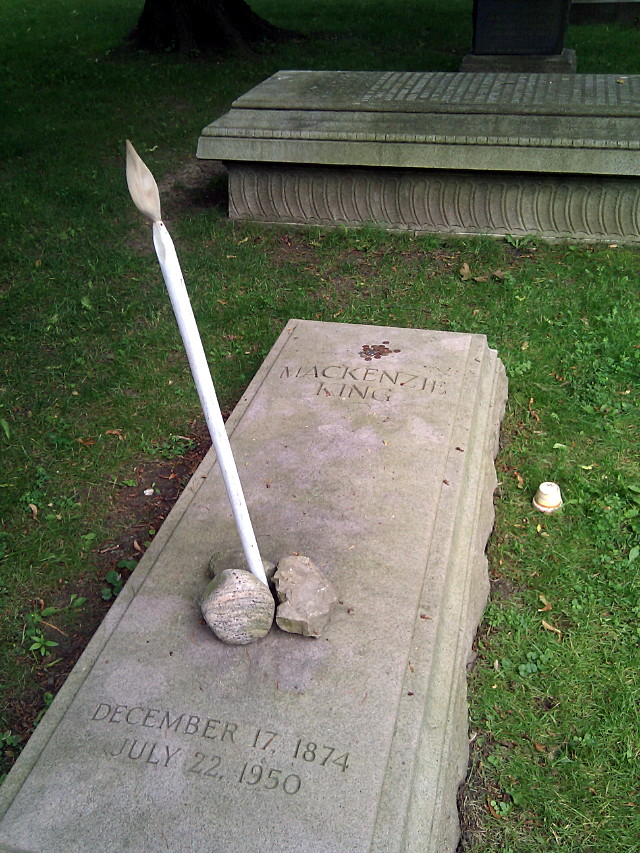 Two days later, with the pot over 30 cents, someone stacked it into neat piles: 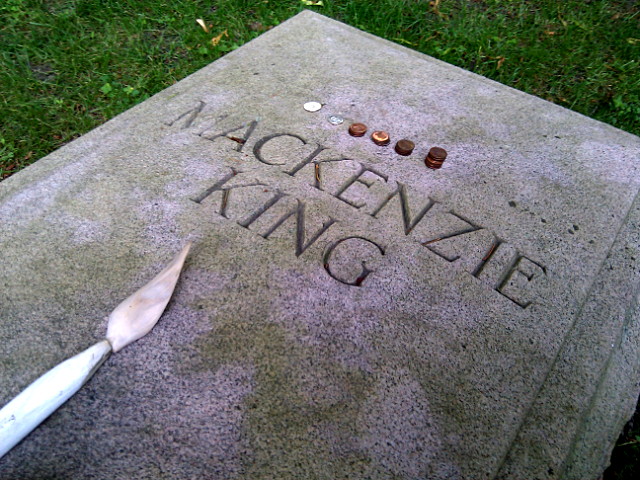 And then on the last day of June, the money disappeared: 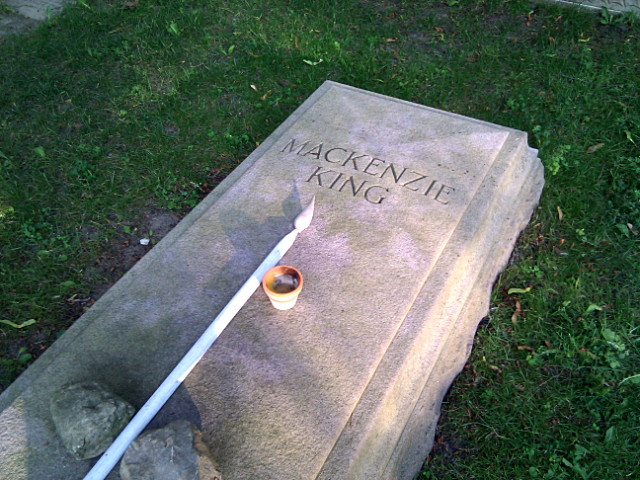 Although the dowel, rocks, and candle continued to shift around almost daily, no more money appeared. Someone did leave a liquid tribute on July 18, perhaps of the sort more familiar to Jim Morrison: 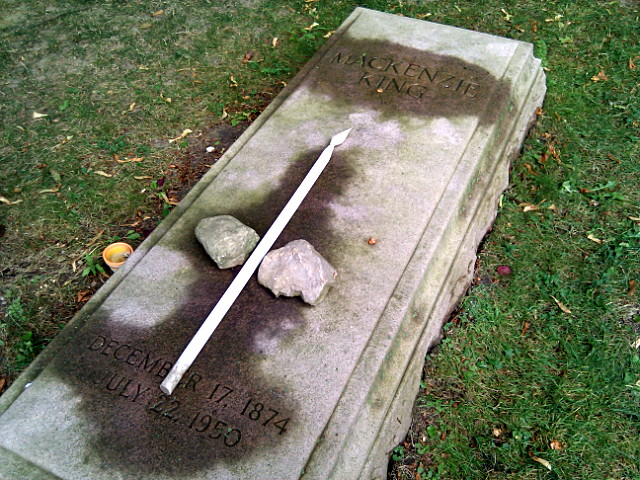 No, I neither smelled nor touched this liquid. But I can say with certainty that it was fresh, it filled all of the carved characters to the rim, and it hadn’t rained at all for two weeks. Between the pennies, the dowel, the rocks, and whatever this was, it seemed obvious that someone, perhaps many someones, had taken an interest in Mackenzie King’s grave. That, or his mother was trying to send him a message. It seemed to me that the accumulation of money could be explained by people seeing a few coins and thinking that it was a tradition to leave a penny. Sort of like tossing a penny into a wishing well, only not quite.

At this point, I had only observed the daily goings-on but by the end of July, I was sufficiently curious to see what would happen that I decided to re-seed the pot with the original amount of eight cents. Unfortunately, I didn’t have enough pennies with me, so I anted up a nickel as well: 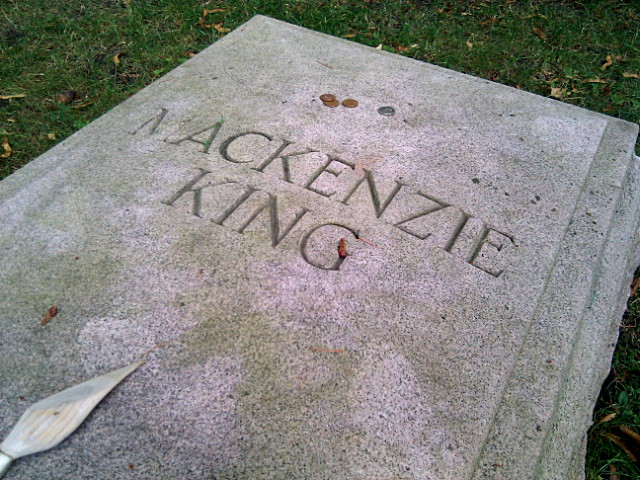 By the next day, someone had added a ninth cent: 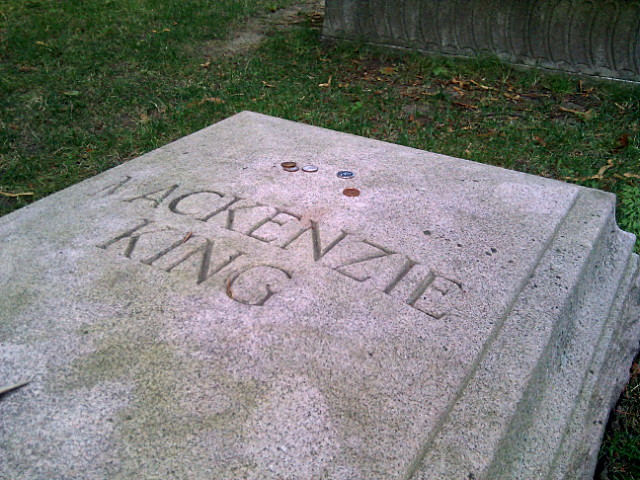 Less than two weeks later, three cents had disappeared, with the nickel being replaced by two cents and a trio of small stones. 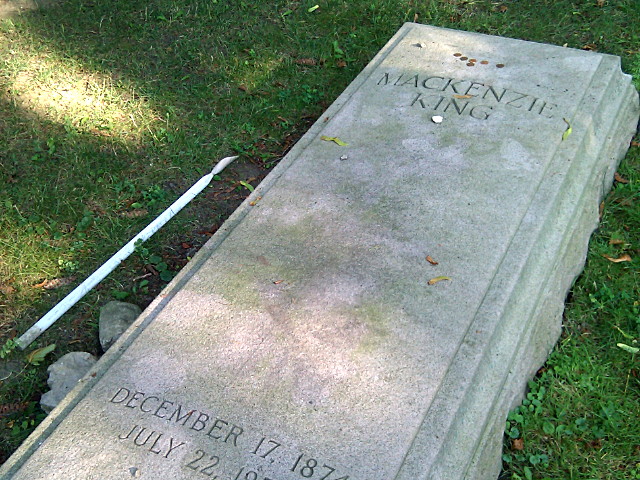 The pot continued to dwindle over the next couple of days, with another four cents and two of the stones disappearing: 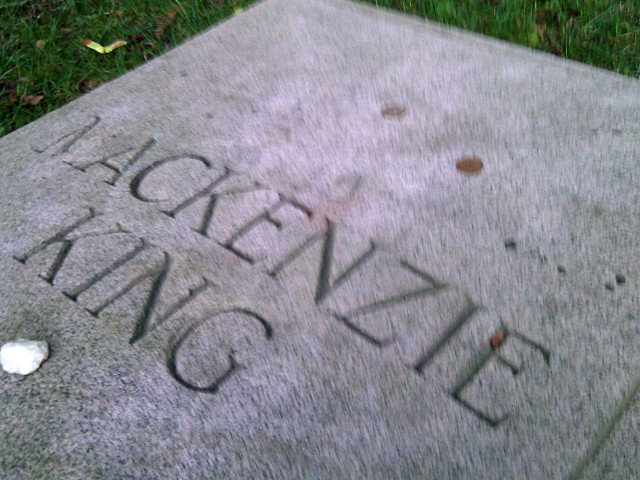 By mid-August, the ledger was bereft of money yet again, having peaked at a mere nine cents. Undeterred by my failure to rekindle a new tradition, I ponied up again on August 22 with the last six pennies I had on my desk: 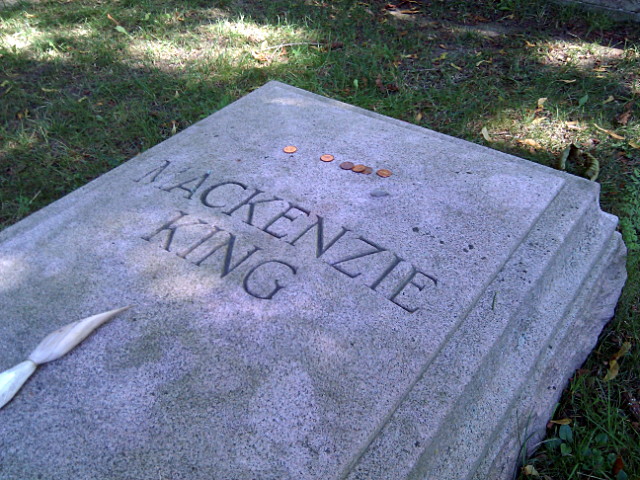 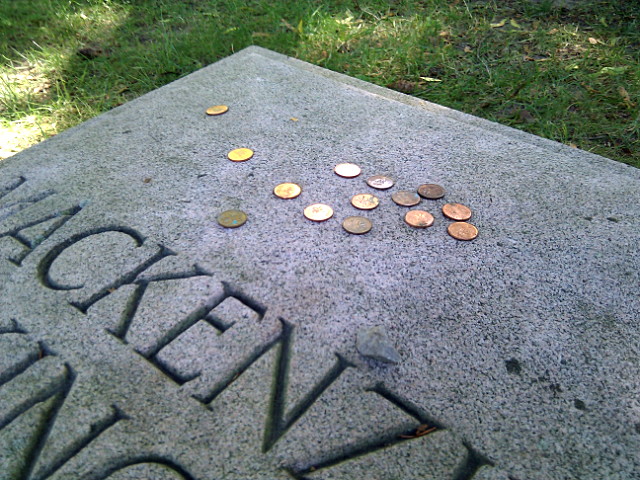 There must have been a guided tour over the Labour Day weekend because the ledger’s holdings more than doubled from fourteen to thirty-one cents that weekend: 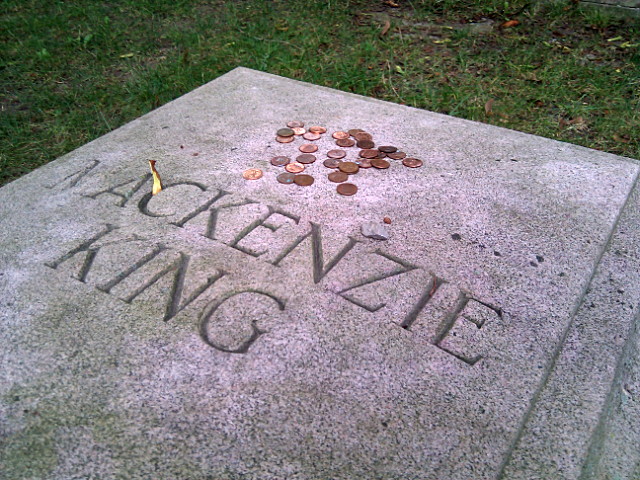 And through September it continued to grow. Thirty-eight. Forty-seven. Fifty-four and a polished stone: 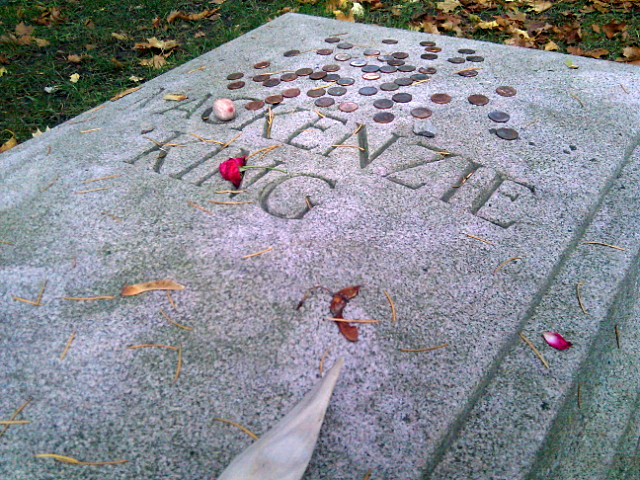 Fifty-seven. Sixty-seven by mid-October! That was an eleven-fold return on my original investment of six cents. But once again, someone scooped up the bounty before the end of October, leaving Mackenzie King’s ledger broke again heading into the winter: 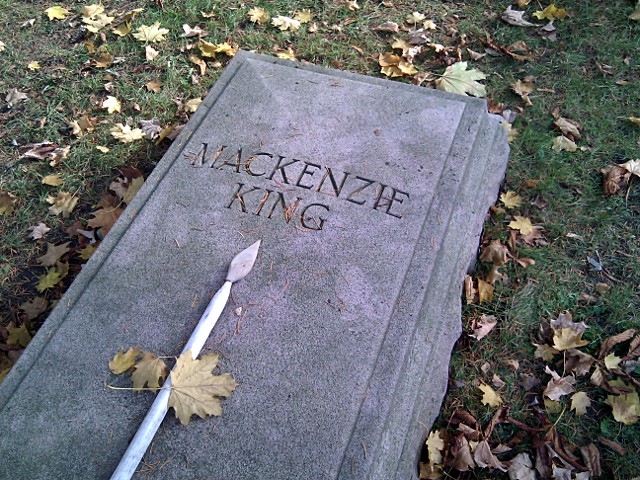 So what did I learn from five months of watching the evolving tributes on Mackenzie King’s grave? People will part with a penny if they think it’s part of a tradition. Seemingly many people will move objects (and cash) around on a grave, but few will take any of it. People will take a pile of coins that include nickels or dimes long before they take one that consists solely of pennies. If you want to double your money in a month, drop some coin on a famous person’s grave and wait. Just be sure to retrieve the principle and interest before someone else does!

I still have no idea where the dowel came from. While it was moved around on numerous occasions, it has been on or beside the ledger continuously since June. I’m not sure where the initial infusion of money came from either, nor about who was continuously rearranging it and the various objects on the ledger. During the summer, I did see one person lurking around the grave who I would describe as suspicious, but I’m sure that I would have looked rather suspicious myself to a hidden observer.

All told, Mackenzie King raised around $1.20 for someone’s popsicle fund this summer and fall.