[This is the second of three posts this week looking at the results of the Pottery Road reconstruction. Yesterday: the improvements for cyclists. Today: the intersection with the Lower Don trail. Tomorrow: suggested improvements for the near future.]

Pottery Road is the only road crossing on the central and lower Don trails from Edwards Gardens at Lawrence and Leslie Avenues all the way down to Lake Shore Boulevard. That’s remarkable if you think about it. Along the way, cyclists share park roadways and paths with motorists and pedestrians as they duck under other streets that are carried over the Don Valley by numerous bridges, ride both under and over various rail lines, and cross the Don River and its tributaries a dozen or more times. As the only road crossing, Pottery Road is worthy of a bit more than the bollard or cattle gate that Toronto typically uses to separate roads from trails. City staff have done an outstanding job of designing the crossing with both safety and aesthetics in mind. 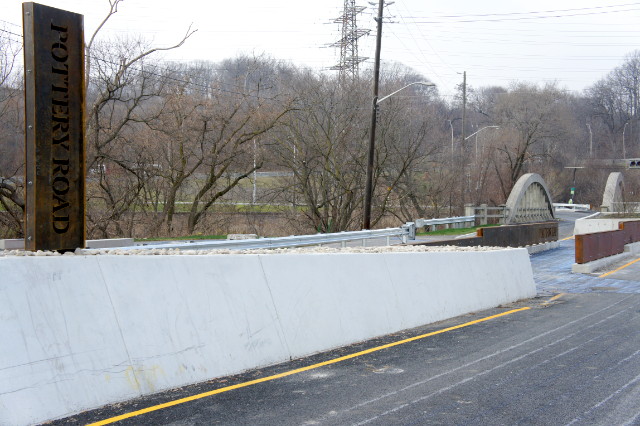 One of the most obvious features is the large upright steel “Pottery Road” sign that guards one end of the pedestrian and cyclist refuge between the two road lanes. The refuge itself has been upgraded and improved significantly. In the old refuge, cyclists would have to look backwards to see oncoming traffic, which was neither convenient nor safe. The new alignment reverses the flow through the refuge so that cyclists are now looking straight ahead to see oncoming traffic. It’s a small change that you don’t even really think about until the first time that you ride through the new refuge. I don’t have measurements, but the new refuge seems roomier than the old, giving more space for passing cyclists and pedestrians.

Conspiciously missing from the paths that approach the refuge are any notices that cyclists must dismount. Given the lack of these signs on this and other recent projects, it looks like the city is finally taking cycling infrastructure design seriously instead of just assuming that everyone who is not in a car is always in the way of everyone who is in a car.

What we get instead of being told to get off our bikes are beautiful (to me, anyway) reminders made from cut steel plate and incorporated into the sides of the refuge: 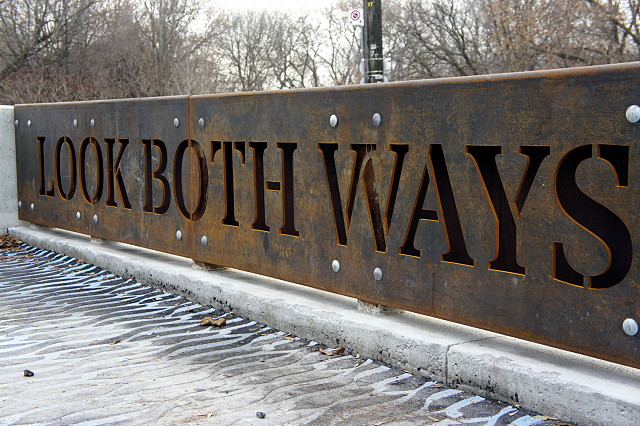 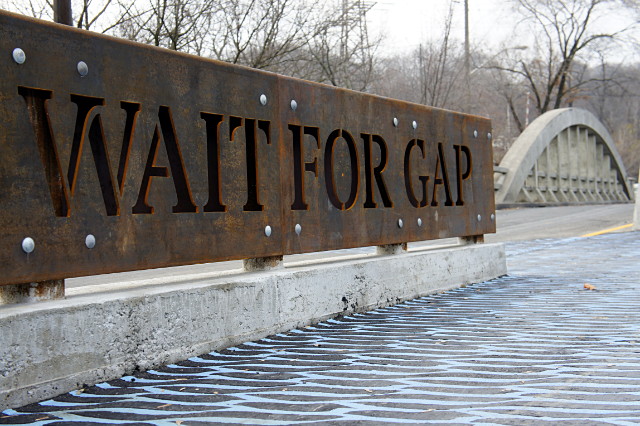 This level of design is far above the typical Toronto Jersey barrier, which is so drearily common that it could go on our municipal flag. I thought it was curious that the rusty steel design here recalls neither the historic concrete bowstring bridge a few steps away nor the nearby Don Valley Brick Works and Todmorden Mills, but it works anyway and is suitably industrial to reflect the heritage of the sites.

The refuge and road crossing also get another significant improvement, in textured and coloured asphalt to mark the intersection. The blue river-like ripples start on the trail, cross the road into the refuge, and flow out the other side: 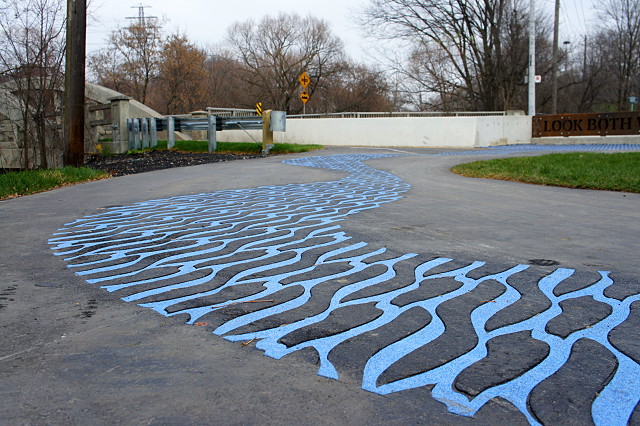 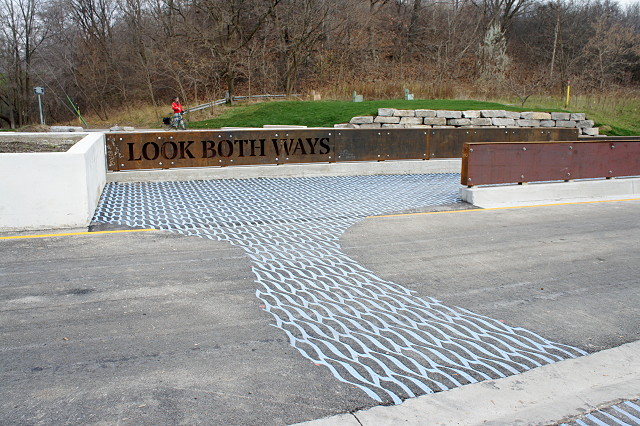 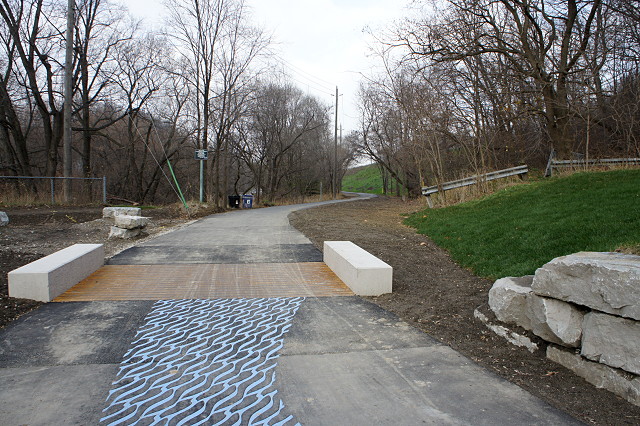 The pattern has been cut or laid directly into the asphalt and the colour looks like it’ll last. I’ll keep an eye on it for any fading.

Also seen above is the rebuilt pathway north of Pottery Road. This had been a wide 2-lane road that connected Pottery Road to Beechwood Drive (I even remember my family driving on it once in my youth). In recent years, it was almost always gated closed and used only by trucks dumping loads at the snow dump beside the Don River, park vehicles, cyclists, and pedestrians. That snow dump was finally closed two years ago and is now called Cottonwood Flats (PDF). Since there’s no longer any need for heavy equipment to use the road, it’s been converted into a normal park pathway.

As I mentioned yesterday, there’s now a direct link from the Lower Don trail to the path up the side of Pottery Road: 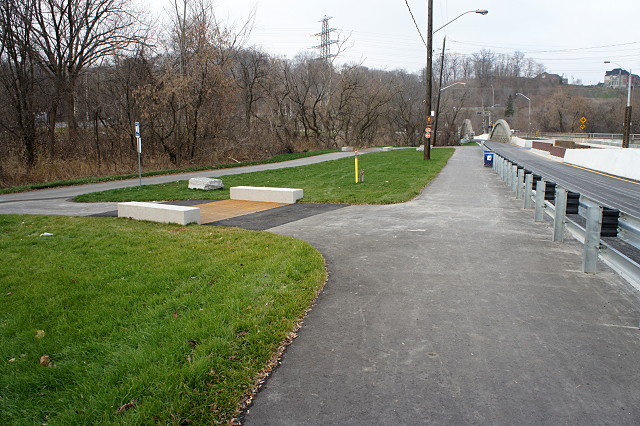 And as I mentioned the other day, all of the work comes with improved wayfinding signs: 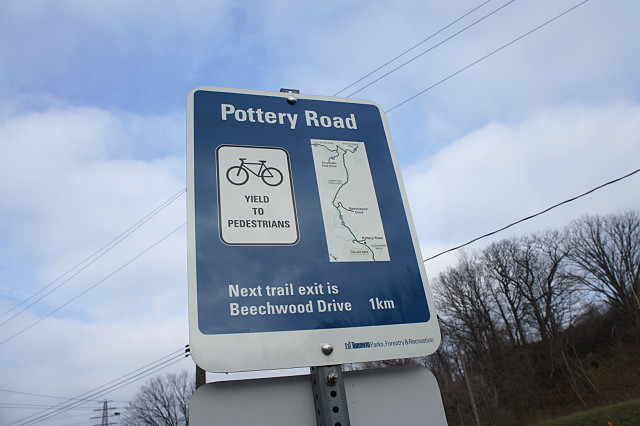 If you ask me, the improvements on the Lower Don trail at Pottery Road alone are worth the inconvenience of closing the road for six months. The work here shows a real understanding of cycling safety and an acknowledgement that the Lower Don trail is an important piece of infrastructure.

One Reply to “Pottery Road: Improvements at the Don trail”