[This is the last of three posts this week looking at the results of the Pottery Road reconstruction. Monday: the improvements for cyclists. Yesterday: the intersection with the Lower Don trail. Today: suggested improvements for the near future.]

In case it wasn’t obvious from my previous two posts about Pottery Road, I should say again that I quite like all of the improvements that the reconstruction project has brought to this important connector. Pottery Road is a historic oddity, one of a small handful of roads that lead directly to the floor of the Don Valley and provide connections to all of the parks, infrastructure, and attractions down there. The only other road access nearby is via Beechwood Drive, which also used to lead to a paper mill. Although car drivers can access alternative routes easily enough, the options for pedestrians and cyclists are too far away to be practical in many cases. So even though Pottery Road has been an absolutely miserable route for pedestrians and cyclists for as long as I can remember, we’ve continued to use it regularly.

So with all the good news covered in my previous posts, what’s the bad news? The main problem with the improvements is that they don’t go far enough. Literally. All of the improved cycling infrastructure and signage ends on the east side of the Don River, with no provision for cyclists between the Lower Don trail and Bayview Avenue. The new cycling facility gets cyclists as far as the trail, but leaves them on their own if they want to continue across the Don River to the Crothers’ Woods trailhead or to Bayview to ride down to the Brick Works or beyond. 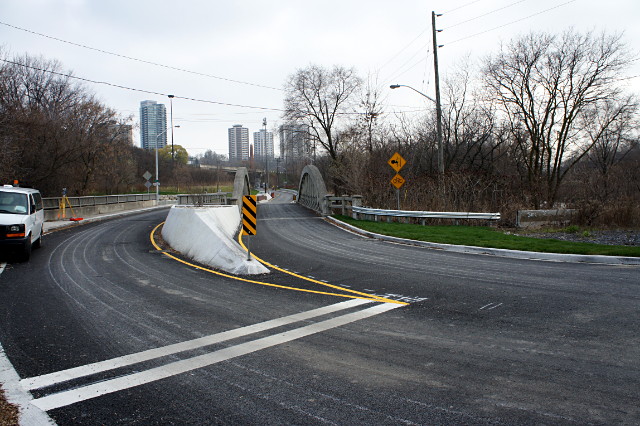 There were two main constraints on taking the cycling infrastructure across the river as part of this project. The first is that there’s no room to add separate bike lanes across the bridges, and no money in the budget to continue the trail onto a dedicated pedestrian and cyclist bridge across the river. The second is that the cycling improvements on Pottery Road and at the Lower Don trail were a side-effect of the larger project; although cycling infrastructure was improved, it wasn’t the primary reason for the project. In fact, one city staffer told Ward 29 Bikes that they didn’t really consider Pottery Road to be a viable bike route and they’d rather cyclists use Beechwood Drive to get into the valley. Fortunately, cycling staff was able to get a lot accomplished against what seemed like a fair bit of push back. But despite that, I don’t see why, for example, the sharrows couldn’t have continued at least across the westbound bridge and been painted coming up from Bayview and across the eastbound bridge until a cyclist could get onto the separated path. This would have required a maximum of eight more sharrows to be painted on the road which, frankly, I can’t see as having any financial impact on a $5 million project.

To make matters worse, Bayview was the site of a parallel project that saw a new separated bike path extended and improved from Rosedale Valley Road past the Brickworks and up to Pottery Road. That path along Bayview ends here, at a sidewalk just a few feet short of Pottery Road: 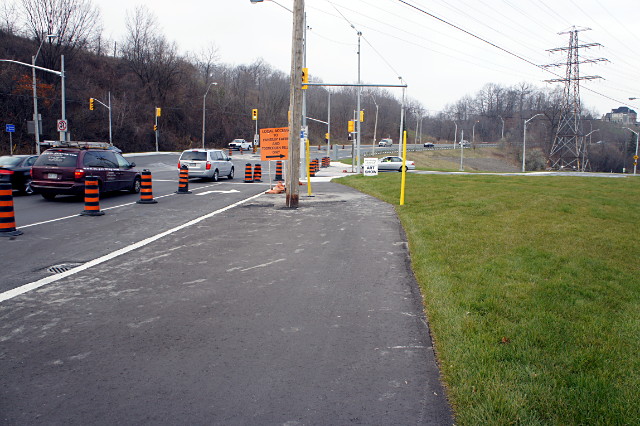 Duncan over at BikingToronto has a pretty good analysis/rant of the problem at this intersection, and I can’t say that I disagree with him. City staff has indicated to 29 Bikes a couple of times that they plan to connect this path to the Pottery Road path and the Lower Don trail, but the timeline has ranged from “maybe next year” to “it’s still in the conceptual stage.” In other words, I’m not holding my breath. But what makes the lack of connection particularly galling is that these two cycling projects, both undertaken at the same time, end less than 200 metres apart (only about 100 metres as the crow flies) and are separated by a wide, newly reconstructed road that could easily accommodate an extra stripe of paint along the sides and a couple of sharrows to safely direct cars and bikes across the bridges. I’m astonished that the two pieces of infrastructure were not connected. 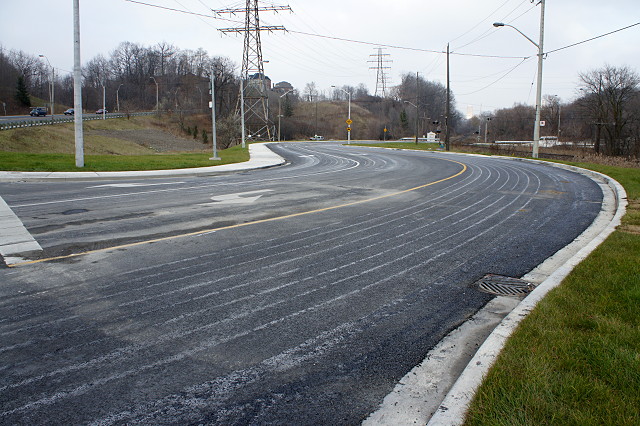 My other concern is with the sharrows in the downbound lane as they reach the Lower Don trail. If you look at the pciture below, a cyclist riding at this point who wants to turn onto the trail has to make a quick 90-degree turn to the left to go southbound or right to go north. The problem here is that cyclists will have to slow down considerably to make the turn in either direction, and there’s a good chance that a speeding car or two will be right behind them. 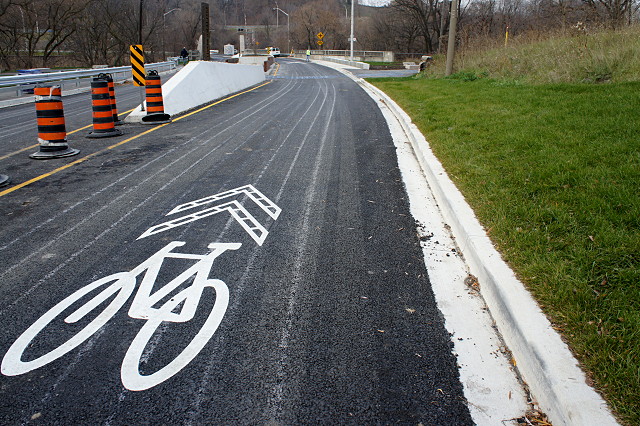 I know from experience riding down Pottery Road for many years that car drivers do not like to brake once they hit the bottom of the hill. Most are still travelling quite quickly as they approach the bridge here and I’m not sure how well they’ll react to a cyclist in the middle of the lane slowing down to 20 km/h to make a turn off the road. My sense is that most cyclists who are heading for the Don trail will just ride down the path on the side of the road. Only cyclists who are going straight through to the trailhead or Bayview will take the lane on the way down. Which is kind of ironic, considering that the infrastructure ignores their needs past this point.

As I said, I like what’s there, but it just doesn’t go far enough. I’m hoping that at the very least we can get sharrows across the bridges next year, and a dedicated cycling path linking up to Bayview shortly after. I understand that the current condition of the infrastructure here is temporary, but it could still stand to be fixed a bit to make it a little safer. It’s better than what was here before, but it could have been so much more without much additional effort.

The reconstruction fixes a lot of deficiencies, but many cyclists will continue to avoid Pottery Road for the simple inevitable reason that it’s a giant stinking hill that’s a real pain in the thighs to ride up on a bike. The final improvement I’d like to see, and one that I advocated at the Ward 29 Bikes public meeting two and a half years ago, is the addition of a bicycle elevator like the famous Trampe in Norway: