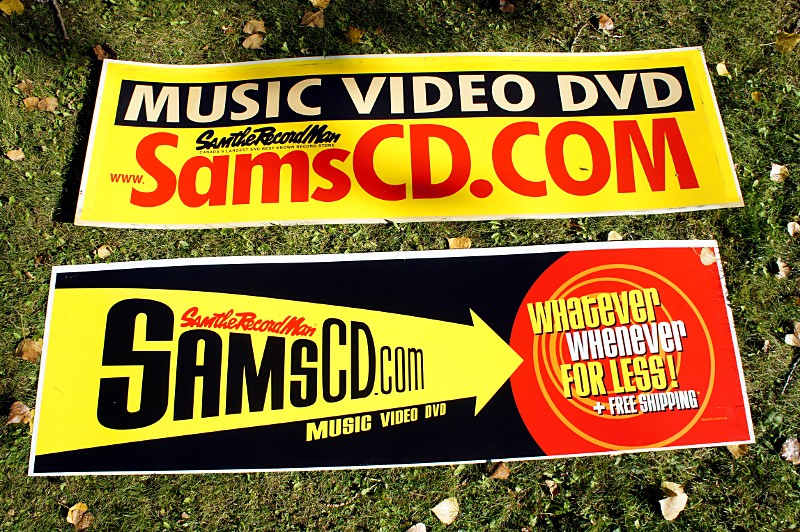 Originally on the side of a streetcar, these ads haven’t seen daylight since they went into my basement in 2001.

Way back in the Internet dark ages of 1999, I applied for a job as a system administrator at SamsCD.com, AKA Sam the Record Man. After a few years of building my skills through slave labour, short-term contracts, teaching, and one-off projects, it would have been my first honest-to-goodness 9-5, on-the-payroll, full-time permanent job. I was over the moon when they called back for an interview. Not because the job ad posted to tor.jobs seemed terribly interesting, but because, come on, it was a chance to work for Sam the Record Man! My temperament just isn’t cut out for retail, so sitting in a dark closet running their computers would be perfect.

Almost from the time I was old enough to stand, I’d tag along with my mother on her regular trips to Sam’s. For ten years, she’d emerge with an armful of Max Bygraves and Al Jolson, and I’d bounce out with anything ranging from a sound effects album (do I want the one with train pulling into the station or the lion roaring?) or a single coveted blank cassette to Bob & Doug McKenzie’s Great White North album. When we moved back to East York after three years in Scarborough, I started making my own weekly pilgrimages to Sam’s. For fifteen years, I’d been heading down to Yonge Street to buy the latest Metallica, ferret out an old John Lee Hooker album, or just to browse aimlessly. I’d almost always walk out with a CD or two—often many more—whenever I walked through the doors and entered the maze. I barely noticed HMV’s arrival down the street, A&A shutting down next door, or the various comings and goings of Cheapies. Sam’s, with its ever-growing and rambling layout, was my place, and I didn’t really care about the others. Going down to Sam’s was, and remains, the only Boxing Day shopping I’ve ever done. So yeah, I wanted to work for them.

I walked into an interview in a Toronto Carpet Factory office with fourteen-foot windows, twenty-foot ceilings, and two guys who were completely cluefree. The technical questions were so softball that someone who had never seen a computer could have answered them. I impressed sufficiently to progress to a second interview with a manager who was not only very clueful, but offered me my choice of jobs: take the SamsCD position, which he assured me would be boring and below me; or take a position at a sister company that was more challenging and (he may not have known this at the time) way beyond my previous experience. What a dilemma: take a job at a company I’d always wanted to work for, or take a job that I’d actually like. After thinking about it for a couple of days, I opted to take the more challenging job. It was a tough decision to make at the time, but ultimately the right one.

Although I wouldn’t be working at Sam’s directly, I’d still be providing administration services through the sister company. Among other things I did for them, I got to upgrade Sam’s hardware and software, recover the primary server when their pseudo-admin mounted a blank partition over /usr on a running system (if you know Unix, you know that’s no good), sit in a handful of meetings discussing the server load and performance problems, and ultimately power off their four servers when the ecommerce venture was shuttered. Sam’s would eventually re-launch with a new website, but the damage from HMV, Amazon, and Napster was already done. So although I never worked directly for Sam’s, I can say that I had a small hand in keeping their systems going for a while. And I ended up with the two streetcar ads above. Maybe this will be the year that I finally mount them for display.

I’ve only been into record stores a couple of times since Sam’s finally closed five years ago. Sure, I still buy music, but only online; HMV and Sunrise are pale imitations of the Sam’s experience. I’d like to think that if Sam’s was still around, I’d still be making regular trips to pick up the latest blues releases, get my hands on an Edgar Winter album, or just see what’s on the racks this week. I never browse Amazon or Chapters, I just search for the thing I want and add it to my cart. There’s no sense of discovery, no joy. Just consumption. Although the passing of music and many other traditional businesses into the online world has largely provided me with a career, it’s a shame that so many kids will grow up thinking that the only thing worth lining up for is this year’s iPhone and will never experience a Boxing Day crush at Sam’s.