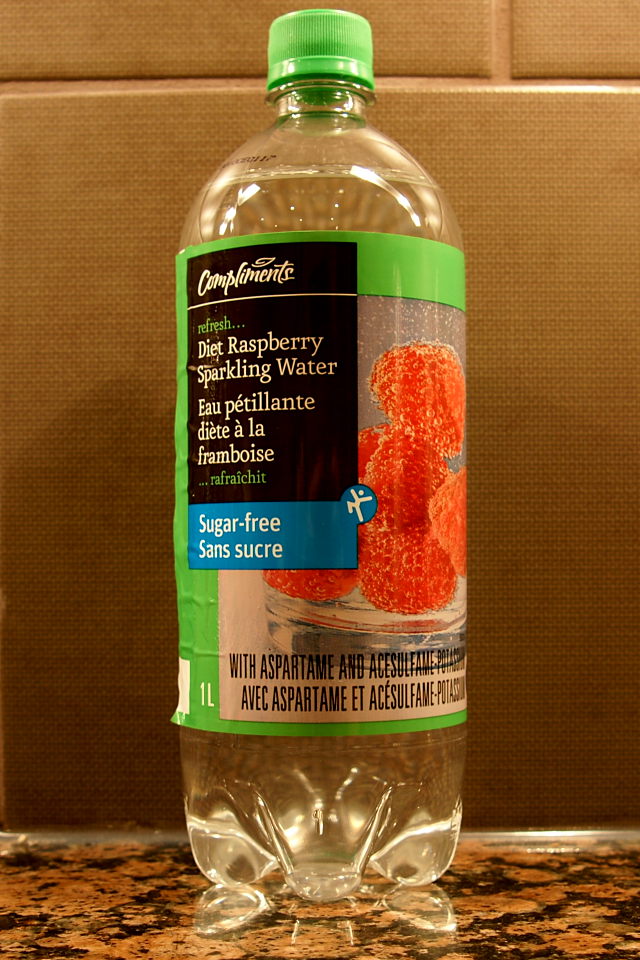 This bottle represents everything that’s wrong with the food chain these days. It’s not just the general waste and unnecessary expense of bottled water, but the fact that companies have somehow managed to convince people to buy diet water. This is by no means the only diet water option on the shelves, I’m just picking on it because it’s explicitly labelled as diet water. And judging by the diet water shelves of my local supermarkets, diet water is one of the faster-growing food segments.

In a few short years, companies have convinced people that they need to drink water from little disposable bottles. But that’s not good enough, so they need flavoured bottled water. And with flavour almost certainly comes sugar or some other sweetener. And something to act as a preservative. And carbonated beverages sell better, so let’s make it all fizzy. And what you end up with is essentially indistinguishable from pop. I haven’t yet seen caffeine-free diet water advertised, but it’s only a matter of time.

Of course, the only problem with selling diet water is that water is naturally calorie-free, and it’s only because of all the crap that water manufacturers (there’s a phrase our parents would never have heard) are putting into their product that they now feel the need to make dubious health claims. Diet water indeed.  What started out as a healthy choice (water instead of pop or other processed drinks) has now been so corrupted by the drawers of water that the healthy choice has become indistinguishable from the unhealthy choice. Just how similar the two products are is made clear by the ingredients list:

So, uh, what’s the difference between diet water and diet pop? Why bother?

But seriously, who needs diet water? Apparently, the people who drink Compliments (non-diet) flavoured water do: it has 90 calories per serving.

Me, I prefer good old Toronto Tap in refillable containers. When I want that extra shot of flavour, I use an old family water recipe: boil 2 cups of water, pour over tea leaves into a small pot. Steep for five minutes. Serve while hot. De-lish.

I read a curious label at work a few months ago, and it got me thinking: What would it be like to restrict myself to food without flavour? I’m not talking about eating nothing but watery gruel and rice cakes, but about eliminating from my diet any foods that list natural or artificial flavour as an ingredient.

The label that got me thinking was on a package of Carnation Instant Hot Chocolate, where “cocoa” came later on the list of ingredients list than two kinds of sugar (the first and second ingredients), hydrogenated oil, and modified milk ingredients, preceding only such minor constituents as cellulose gum, salt, and diglycerides. And, of course, artificial flavour. I had two minor epiphanies at that moment: first, that you could probably remove the cocoa entirely from the mix and not really notice any difference in the final product. It’s almost as if the cocoa is there only so that they can call the final product Hot Chocolate and not Hot Brown Powder Vaguely Resembling Something You Enjoyed As A Child.

The second epiphany was that “flavour” of any kind on an ingredient list is the surest sign of food that’s been overly processed. After all, I can’t remember the last time I reached for the flavour shaker on the dining room table to lend a bit of bite to a bland dish. In our kitchen, adding or changing flavour is accomplished by mixing and balancing actual ingredients, not by opening a can of molecular soup that captures the essence of a flavour without any of the bother of actual ingredients or preparation.

The web page for Carnation Instant Hot Chocolate claims that it’s “a good source of calcium when prepared with 6 oz (175 ml) of milk.” Yes, I suppose that’s true in the strictest sense. But by that measure, Iocane powder, dirt, birch bark, and air are also good sources of calcium when prepared with milk. Or, you could just drink the milk (and hold the modified milk ingredients).

So for several months, I’ve been reading ingredient lists of virtually every processed food I eat, with a soft target of January in my mind for the beginning of my culinary adventure.

I think I eat a healthier diet than the average North American. Like anyone, I overindulge in some things and have my vices, but I eat more fresh fruit and vegetables than most. I eat meat, but far less than I used to. Butter is virtually gone from my dinner plate. We prepare dinner fresh at home 5-6 times a week, I make lunch every day rather than popping out to the local Burger King, and I don’t even put sugar in my tea any more.

So as of today, I’m going to eliminate as much flavour as possible from my food intake. The ultimate goal is to get rid of it all over the coming weeks. I already have a good idea of what’s going to have to go (yes, this includes Grapples) and I’ll be posting updates on my progress every once in a while.