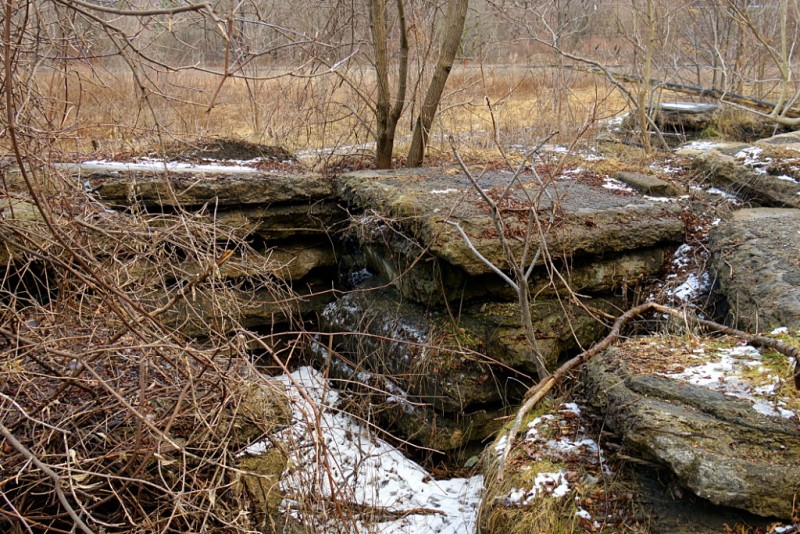 The strangest thing in Cottonwood Flats is what my fellow Don Valley explorer Rudy Limeback calls “Slab City.” That’s as good a name as any that I can think of, so I’m going to run with it. Slab City is a series of concrete and asphalt slabs piled about 5–7 feet high that runs along the bank of the Don River in Cottonwood Flats. A very short portion of Slab City is visible in this view from Bing Maps as the jumble of big square rocks near the middle of the frame. I don’t know anything about the origin of the slabs, or when or why they were placed along the river. I do know that their placement predates my first bike ride around the site sometime in the late 80s. They are all reinforced concrete and some have a layer of asphalt on top of them, so I’d speculate that they were part of a bridge deck at one point. The Leaside Bridge was rebuilt in the 1960s and is close enough that this site would have been a convenient dumping ground. That’s just conjecture, though. A more fanciful conjecture is that they’re the remnants of the Bayview Ghost. Note that I don’t actually believe this to be the case, but wouldn’t it be awesome if it was? Check out the short gallery of Slab City below the fold. 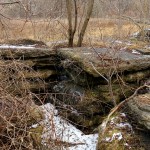 The piles of slabs line the western flank of Cottonwood Flats along the Don River. 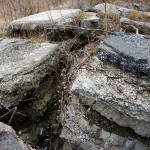 Many of the slabs are topped with a layer of asphalt, betraying their origin as part of a road surface. This is why I think they were originally part of a bridge deck. 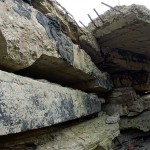 Most of the slabs were cut to uniform sizes and very neatly piled. They aren't just random castaways thrown into big garbage heaps. 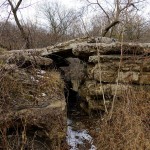 Another view through the slabs. 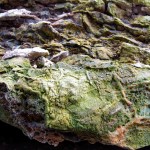 The slabs are all slowly eroding and being transformed back into something more natural. 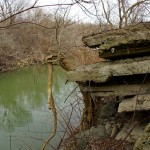 This pile of slabs is leaning toward the Don River. It's not in immediate danger of collapsing, but I'm sure these will end up falling in the river in a few years. 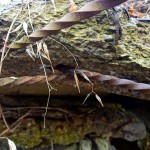 An interesting feature of the reinforcing bars in the slabs is that they are made of solid steel bars that were twisted into shape, not simply pre-formed with ridges the way that modern rebar is. I'm not sure when the change from twisted to formed rebar was made, but it certainly helps date the construction period of the slabs to pre-whenever-that-was. 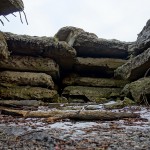 Some of the slab piles are placed in a way that creates usable hollows between them. Some are used by partying teenagers, while others may have sleeping bags in them. This one is larger than most and provides a three-walled party room facing the river that's big enough for maybe half a dozen people to lounge comfortably. For as long as I've been passing by here, the centre of this room always has the charred remains of a recent campfire. 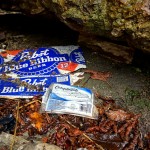 What's this? PBR and chicken wieners? Damned hipsters are everywhere.