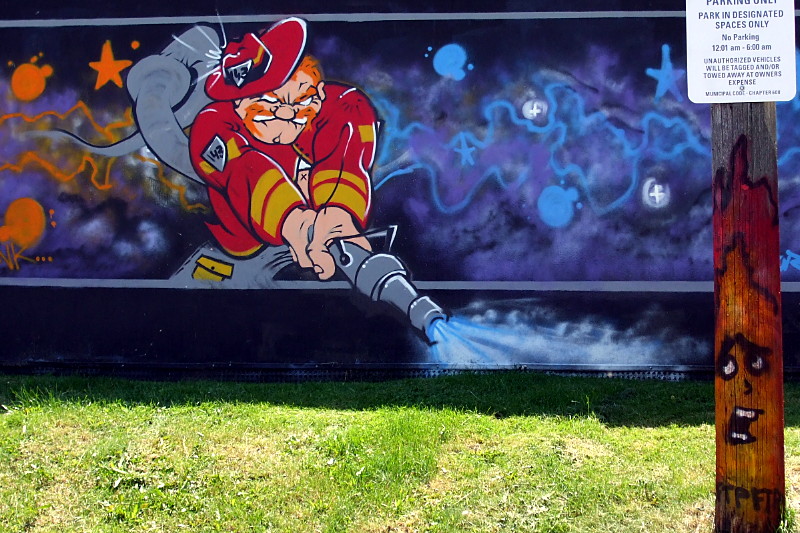 I published my first public post on this blog five years ago today. Writing a blog always struck me as kind of a funny thing to do, so I always wanted to have fun with it. My work largely requires me to fix problems (occasionally of my own creation) on relatively short timelines so I’m used to quickly identifying issues and researching solutions to the various technical absurdities and contradictions that I encounter. I suppose that mindset translates into my Dodgeville ramblings as well. In a lot of ways, updating Dodgeville is a release valve, a way to get something off my chest or to put aside some other problem for a few minutes while I slap together a post. Although I write primarily for my own enjoyment, I greatly appreciate that you, my loyal half-dozens of readers, accompany me on my journeys through the city, the countryside, and the boxes in my basement.

The topics I cover are frequently hyper-local and the posts often more detailed than necessary. Indeed, something as minor as repaving of a road around the corner from my house merited a grand total of six posts (so far) examining the results. A big empty field has been the subject of three recent posts. And on days when I’m too lazy to go outside, I just write about random things I pull out of boxes in the basement. I’ve sometimes thought about resubtitling Dodgeville from “Random wanderings and wonderings” to “Stuff within a five-minute walk of my house and sometimes not even that far.”

One of the eternally frustrating things about blogging is having too many things to cover and not nearly enough time to write about them all. So my digital archives slowly fill with clippings, links, pictures, snippets of potential posts, research reminders, and large projects that just haven’t come together yet. Some of those projects have been hanging around on my to-do list since 1994, waiting for technology to advance to the point that I’ll be able to do justice to my vision. One project idea that I had in 2006 will finally be coming to fruition this summer. Many others continue to bide their time, already born of my 1% inspiration and awaiting my 99% perspiration. Still other posts await because they were no longer timely when I finally got around to writing them, but will almost certainly be topical again at some point. Yet more ideas never made it into the serious consideration stage, including Bruise of the Week, Grave of the Month, and The Daily Sock. Consider yourselves lucky.

It’s been three years since I did one of these anniversary posts, so rather than going back and picking out my favourite posts since then, I’m going to put up a short gallery of a few interesting pictures that never made it into full posts for one reason or another. As always, thanks for reading, and I hope you accompany me for another year of wanderings, amusement, outrage, and signs. Always more signs.

Check out the random gallery below the fold. 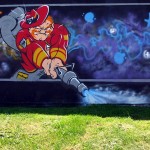 Mural artists working on the side of this garage incorporated a nearby hydro pole in their creation. 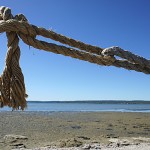 A sunny day, a weathered rope fence, and a deserted beach. It was a very relaxing day at Presqu'ile. 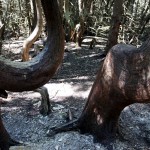 Presqu'ile is a beautiful park to visit and the strangest thing there is this grove of horse trees. 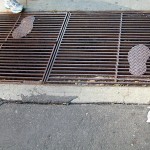 We barely spent a day in Calgary when we visited a couple of years ago, but this set of diamond plate footsteps over a grate in the sidewalk was one of the unexpected surprises. I always hear about women getting their high heels stuck in this kind of grate and this is a simple and elegant solution that looks great to boot. 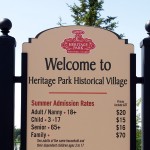 Still in Calgary, the most peculiar thing we saw was this admission board that offered up a price for "Adult / Nanny". I'm not sure why nannies need to be broken out as a separate category of adults, I guess if you judge by the way that a lot of families treat their nannies, they're lucky to be considered human, never mind adult. I can just imagine the ticket booth conversations that led to nannies being specifically included on this sign. I was also amused by the explicit restrictions on the "family" rate. That's either a second attempt at getting nannies to pay up or a not-so-veiled shot at polygamists. 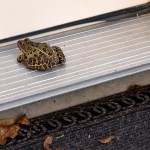 A frog was waiting at the front door of the cottage one day, as if to join us for lunch. Sorry Michigan J., all the good bugs are by the pond in the back. 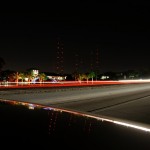 A cluster of communication towers is visible almost everywhere you go in Austin, Texas. The funny thing about them is that you always seem to be driving toward them, but the road never quite takes you close enough to figure out where they are. 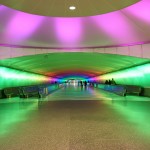 Visitors to the Detroit airport are treated to a unique visual and auditory treat in the tunnel connecting the two terminals, where a light show and coordinating soundtrack immerse travellers. It was wholly unexpected, and made the trip bearable. If you ever fly to Detroit (or have the opportunity to transfer through it), block off 15 minutes in your agenda to sit back and enjoy the show. 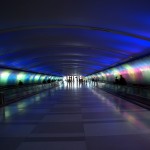 The Light Tunnel at the Detroit airport offers up a sensory experience unlike any other airport installation that I've ever seen. 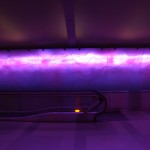 The walls of the Detroit airport's Light Tunnel pulse with waves of colour washing along its length. 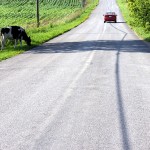 A cow in Prince Edward County got out of its fenced enclosure to graze beside the road. 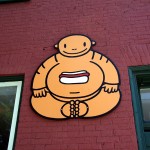 I didn't eat at Buddha Dog in Picton, but I have to give them extra marks for their funny website URL: www.buddhafoodha.com 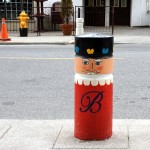 A line of bollards outside the Briton House Retirement Centre at Mount Pleasant and Soudan have been painted up as Beefeaters guarding the entrance. 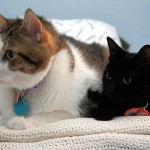 Our biggest project in 2011 was adopting a new cat. She was a stray kitten, probably only a couple of months old when she seemed to take up residence in our backyard in the fall of 2010. We lost track of her that winter, but she showed up again in the spring, barepawed and pregnant. After disappearing to give birth (the kittens died), she took up residence outside our back door, melting Risa's heart in the process and guaranteeing a plot to rescue her. She was probably only about 10 months old when we bundled her up to the vet last June, and she's been inside and happy ever since. She both idolizes and terrorizes her big brother, but he couldn't have asked for a better little sister.