One of the many fun things about living on the Danforth is wondering what sacrificial lamb the Conservatives will be tossing to the electorate this time around. Tory candidates in Toronto-Danforth have been drawing around 10–15% of the vote in recent federal and provincial elections, making the continued municipal success of Case Ootes in the northern half of this riding a curious aberration.

This time around, John Tory‘s team drops Robert Bisbicis, a 26-year-old wiz kid fresh out of 8 years at the University of Windsor, among the Liberal and New Democratic wolves of Toronto-Danforth. His bio and position statement is pretty standard Conservative material, but contains this awkward declaration:

Robert is engaged to Amanda Moscar, an actor, singer, dancer who is currently operating her own music studio in the beaches, which she and Robert built together. Robert and his family know the value of the arts.

Combined with assurances that, “he knows that local residents need to keep more of their earned income,” and that “he believes the system needs to change, not the people,” I suppose the statement is meant to allay any fears that a Conservative government may be petty, mean-spirited, or vindictive. I remain stubbornly unconvinced, despite the fact that he’s engaged to an actual artist. Even if they did build the beaches together.

I’m reminded of the 2004 federal election, when I lived in neighbouring Beaches-East York. I posted to a mailing list about my encounter with the Conservative candidate the day before nominations closed halfway through the campaign:

I met the Conservative candidate in my riding (Beaches East-York) today. I’m not sure that “met” is exactly the right word here. He actually chased us half a block down Woodbine Ave. this afternoon, shouting that he just wanted to shake our hands. So we stopped and chatted for a minute. I don’t know about other ridings around the city, but here and next door (Toronto-Danforth), the Conservatives will be hard-pressed to beat the Greens for a very distant third. How distant? Well, at 3 p.m. this afternoon, poor Nick Nikopoulos was still trying to find 100 electors willing to sign his nomination papers. With nominations closing tomorrow afternoon, he’s got his work cut out for him.

Nick did get his nomination papers signed and garnered about 15% of the vote despite running what one prognosticator on the Election Prediction Project called “one of the worst campaigns I had ever seen anywhere at any time.” Robert, you should be so lucky. For Conservatives, these east-end ridings must be like the September roster call-ups in baseball: you know the poor shmucks are going to get the living tar beaten out of them, but you want to give them the experience and judge whether they’re ready for The Show. Some never make it back.

I’m a little behind on my reading, but I couldn’t resist sharing this nugget of prognostication from the May 1857 issue of Scientific American:

We believe that no particular use is made of the fluid petroleum, from the ‘tar springs’ of California, except as a lotion for bruises and rheumatic affections. It has a pungent odor, and although it can be made to burn with a pretty good light, its smell is offensive. This, perhaps, may be obviated by distilling it with some acid; we believe that this is not impossible in this age of advanced chemistry. If the offensive odor could be removed, a valuable and profitable business might be carried on in manufacturing burning fluid from it.

This quote was published earlier this year in Scientific American‘s monthly “50, 100 & 150 Years Ago” feature, where they reprint snippets of interesting stories from back issues of “the oldest continuously published magazine in the U.S.” Pungent, offensive, and the basis of the modern world. Seems about right. 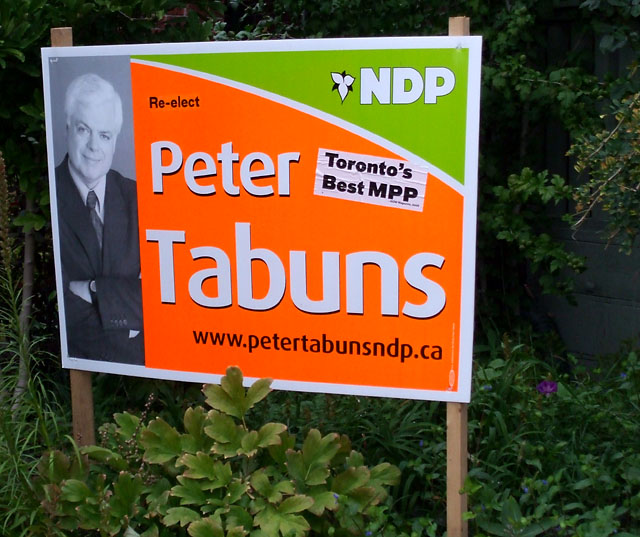 Some of Peter Tabuns’s election signs have a curious sticker on them declaring him to be “Toronto’s Best MPP.” I thought at first that someone in his campaign was merely being boastful until Risa pointed out the tiny type that attributes the quote to NOW Magazine last October, barely six months into his first term:

The former Greenpeace director is one of the only voices in the legislature pressing for a provincial climate change plan. He’s also waged war against the Portlands Energy Centre and nukes, while fighting for screen time for Canadian flicks, early childhood learning centres in his ‘hood, same-sex parental rights and the Chinese head tax redress. Can’t wait to see what he does in the next nine months.

Who knew? I’m glad that thanks to the hard work of Toronto’s Best MPP, we don’t have to look at that big ugly Portlands Energy Centre and won’t be getting any more nuclear plants. The air smells cleaner already. 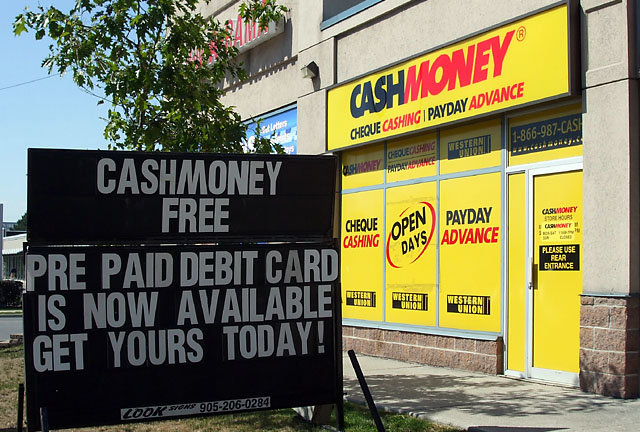 The helpful people at CashMoney are offering an innovative new product: pre-paid debit cards. Yes, for just $1.99 to activate the card, $1.99 to reload it, $0.50 per debit transaction, $1.99 per ATM transaction, and $2.50 per month, you can have the convenience of a debit card just like all your friends and “start spending life your way.”

An average month of 2 deposits, 4 ATM withdrawals, and 4 debits would cost $16.44 with a CashMoney debit card, versus $4 at Royal Bank, $3.90 at CIBC, or $0 at PC Financial. Even if you find yourself in the vicious cycle of payday loans, you’re far better off taking the money and walking across the street to the bank to use their services rather than loading up your CashMoney debit card. Surely it’s not so hard to get a bank account these days that a CashMoney “pre-paid debit card” is filling a legitimate need.

I assume that the “free” offer mentioned on the sign above waives the activation fee, but preserves all of the other fees. MoneyMart also offers a debit card which is just as big a money pit as CashMoney’s.

It’s amazing (not in a good way) that these things are still available in Ontario.

I know it’s called the Family Coalition Party, but they seem to be taking the name a little too literally. According to the candidate list at Elections Ontario, the Carvalho family will be holding down the FCP fort almost single-handedly with an impressive slate of six candidates:

Not to be outdone, the Kidd family is running a staggering eight candidates for the same party:

Of the 63 registered FCP candidates  as of September 11,  an unbelievable 22% belong to these two families. A candidate pool that shallow seems kind of creepy to me. It’s a good thing these families aren’t any bigger. 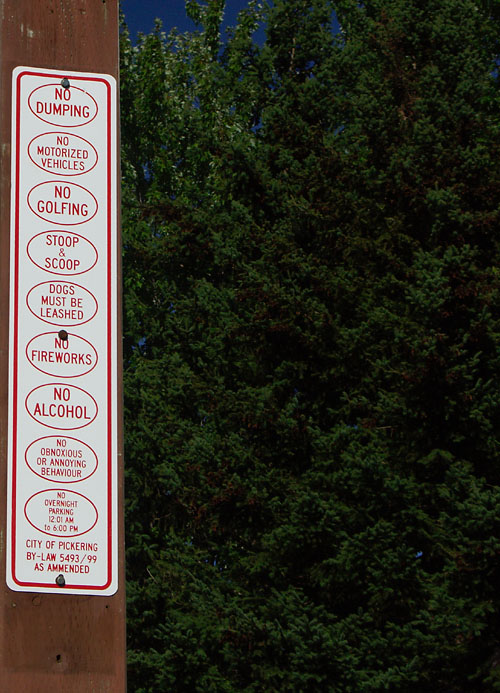 No obnoxious or annoying behaviour? What is this, Celebration? These signs dot most of the parks in Pickering, our fun-loving neighbours to the east. Bonus points for spotting the two errors. I suppose that correcting the spelling mistake on the signs would be considered both obnoxious and annoying. 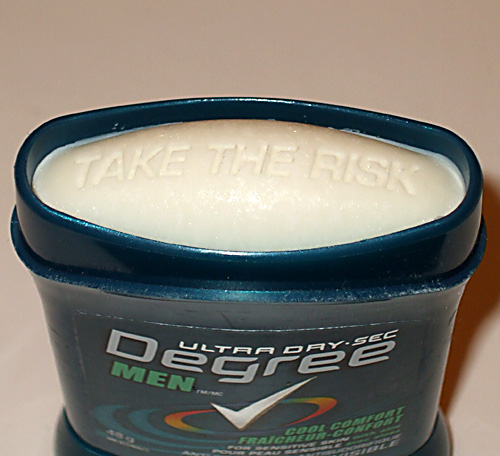 I’m not sure what I was expecting when I opened up my first package of Degree anti-perspirant, but I sure wasn’t expecting a motivational message. It’s been four days since I let my underarms take the risk and the only thing they’re doing so far is sweating a bit more than usual.

Risa, who’s a long-time Degree user, assures me that there are no such messages on the women’s product. Does Unilever think that men need more motivation than women, or just that we’ll buy any crazy thing that talks to us in the morning? Thanks, I think I will take the risk and buy a different brand next month. Something that doesn’t bring Successories to mind.

So how does a festival which lives primarily by word of mouth deal with such near-universal bad reviews? If the people moved to comment online at Torontoist, BlogTO, and Chowhound are any indication, returning visitors will be fewer and farther between in future years.

I walked the festival twice this weekend and noticed two things: the crowds, while still huge, were noticeably thinner than last year and the year before; and many more people were expressing their disappointment at the supposed bargain prices ($5 for lemonade?), the crowds, and the general atmosphere. The task of navigating the huge event has become an ordeal to be endured, rather than an experience to be relished.

I was especially taken aback by the fact that the best gyros restaurant on the strip was serving up noticeably inferior product at their booth, presumably because it was outsourced for the event. Their normal delicious gyros was available in the virtually empty restaurant a few steps away. Even the merchants seem to be turning their back on the Taste.

All of the anecdotal evidence above suggests that the Taste of the Danforth is already in decline. There are basically two options for the future: the festival can continue down the current path for a few more years, milking its reputation for every last dollar until the whole thing inevitably implodes (can it be long before they start asking for financial support from the City?); or they can attempt to re-invent the Taste as something that people will actually enjoy once again.

My first suggestion would be to dump some of the high-priced corporate tents and beer gardens in the middle of the street and put in some chairs. People need to sit. 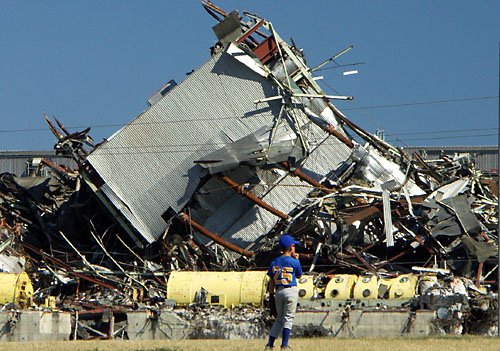 Last month’s foray into a Chernobylesque landscape came courtesy of the Portlands Energy Centre near the Leslie Street Spit. Today’s comes from a visit on Saturday to the demolished Lakeview Generating Station in Mississauga, where baseball games in the nearby Lakeview Park are conducted in front of a rather surreal backdrop. Business as usual on one side of the chainlink fence, chaos and destruction on the other.

The piles of rubble from the demolition still loom over everything else within sight, completely dominating the landscape every bit as much as the station did when it was still standing. I guess the cleanup is going to take a while yet. 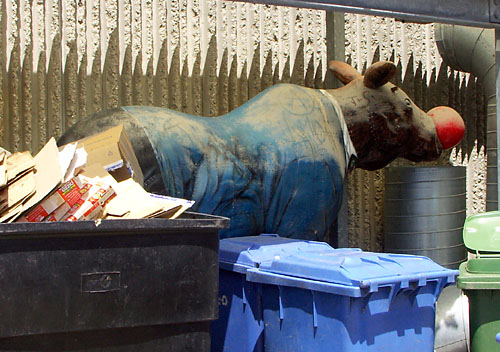 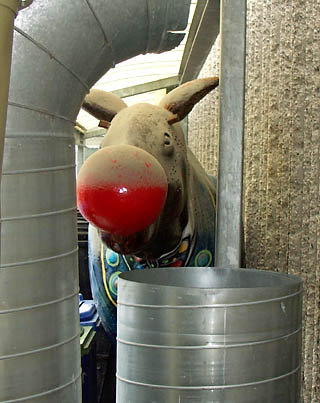