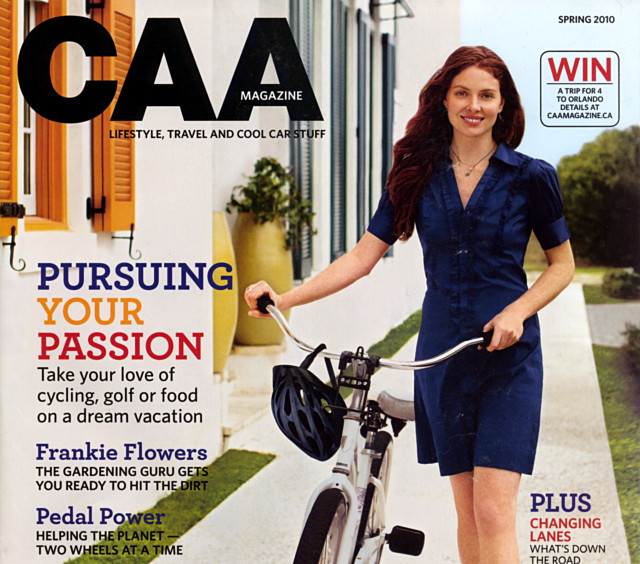 There are some things you just don’t expect to see, and a bicycle gracing the cover of the Canadian Automobile Association‘s quarterly magazine ranks right up there. Not only is cycling included in the cover story (although the online summary doesn’t say much about cycing, the original in the magazine includes several paragraphs and a sidebar about cycle touring), there’s also a second article extolling the virtues of public bike sharing programs like Montreal’s Bixi.

I just finished watching the worst kind of call-in show, CityOnLine on Citytv. Call-in shows in general provide somewhat questionable entertainment, and often present such a skewed perception of reality that they are even more questionable as sources of information. Today’s show about imposing a downtown congestion charge on vehicles like London‘s was no exception.

The impetus for the show seemed to be a story in today’s Star that Councillor Brian Ashton is going to London to get more information about the effects (both good and bad) the charge has had on that city. There was no indication in the story that Toronto would (or could) implement a similar toll any time in the near future, nor how high a potential Toronto toll would be — Ashton is just gathering information on the subject, not drafting a by-law.

Of course, the show’s host, Ann Rohmer, directed the discussion throughout the half-hour as though council was already pressing ahead with this, and that the toll would be $20/day. She and her guest, Faye Lyons of the CAA never really suggested any possibility that a Toronto charge could be lower than that (or higher!) or even work entirely differently from London’s flat rate once-a-day charge. Naturally, our congestion charge would have to be at least as high as London’s if we’re going to be considered a World Class City.

The callers, predictably, were dead-set against the idea. Most (though not all) callers were from outside Toronto and generally echoed two themes: 1) $20/day was way too expensive, and 2) they hated coming into the city because it was so expensive, too difficult to find parking, and too frustrating to get anywhere because traffic was so bad. None of the callers seemed to make the mental connection between their complaints about traffic and the very problem that the city needs to address.

Also predictably, Lyons was against the toll too. Imagine that, the Canadian Automobile Association against something that may affect their free-wheeling ways. Shocking! While I don’t fault Lyons for presenting her organization’s point of view, I do fault Citytv for not having someone with an opposing view on the panel. And that’s the real prolem with call-in shows: too often they have someone advocating one half of a contentious debate with no one there to rebut them. And let’s face it, the call-in demographic isn’t exactly known for its non-knee-jerkability.

It’s precisely this kind of simple-minded, lopsided presentation that poisons debates and stifles political will to do anything. It becomes so fixed in people’s minds that “wacko proposal X” == “end of civilization as we know it” that politicians aren’t even willing to discuss anything that could even be remotely interpreted as addressing the problem in a useful way. Instead, we end up with half-measures and platitudes that end up solving nothing.

I’m willing to bet that tomorrow’s Toronto Sun front page and/or main editorial will rail against this “cash grab” by Toronto’s “car-hating” council, further eroding the debate among people who don’t take the time to think that their actions may have consequences. It’s entirely possible for intelligent people to disagree, and I respect alternative viewpoints on virtually any issue, but I object to debate by shouting and fear-mongering, which is what proponents of business as usual frequently resort to. To be fair, proponents of change also frequently resort to FUD and name-calling, invoking the end of the world and referring to opponents as “dinosaurs” or worse.

Back to the show. One caller from Oshawa said that he was last in the city to see the Lion King (which closed over three years ago) and another $20 on top of his $350 theatre excursion would keep him from visiting the city as often. I’m not sure how much more infrequent his visits could get. Another complained it was already so expensive to drive in from Mississauga, find parking on King Street, take a cab to the Hummingbird Centre, watch a show, cab back to the parking lot, and drive back to Mississauga. Could I suggest to both of these callers that it would be better, for both their wallets and the city, if they parked their cars at a suburban GO lot and took the train into the city?

I can live with the obvious bias toward a particular viewpoint built into today’s show, but it was made almost laughable when Rohmer asked Lyons to expound the intricacies of such topics as tax impacts on businesses, quality of life for condo owners, the London economy, Toronto’s international reputation, and doctors’ incomes. Naturally, as a PR person for an automobile association, she was fully qualified to answer these questions as the expert witness of the half hour.

In discussing the potential impact of a London-like toll, both Rohmer and Lyons either didn’t say or didn’t know that London’s toll is 90% reduced for people who live within the congestion zone. This would have been an important point to discuss during the hand-wringing about the impact of a charge on people who live within the zone. But hey, why place information and reason in the way of the spitting-mad fury of callers? It’s about good TV. Entertainment. And a reasoned debate is not good TV.

Anyway, when they totalled up the calls at the end of the show, about 1300 of 1400 poll respondents said they wouldn’t pay $20/day to drive into downtown. Which is kind of the point behind a congestion charge, isn’t it?

Citytv’s mangling of the debate aside, a congestion charge does present an interesting problem for Toronto. Unlike London, we don’t currently have the transit infrastructure to handle an increased load of commuters. GO and the subway are pretty much at capacity during peak hours and we don’t have enough streetcars and buses to significantly increase capacity there either.

A congestion charge could help fund new transit expenditures, but we’d need to have the increased service in place before we impose a toll so that people will have a real choice about how to get into the city. Unfortunately, I don’t think that our esteemed council would be willing to make a real investment in transit without the revenue to pay for it up front. Toronto council doesn’t seem to subscribe to the belief that you have to spend money to make money. A more appropriate tagline for our council would be, “you have to spend money to spend money, and spending money is not allowed.” In short, there’s probably no political will within Toronto to allow a congestion charge to work properly. Hell, there isn’t even enough political will to paint a few bike lanes on the road.

But what if somehow, the political will emerges? How should the toll be implemented? I think it’s clear that a flat rate of $20/day is way too high for Toronto. World-class aspirations aside, Toronto is not London. It’s also unfair to charge someone who pops downtown for ten minutes to pick up a radio the same amount as a courier who drives around the core all day long. The Sunday Star had a good article about a local company that has developed an alternative to a flat rate system like London’s. It can work more like the hated but well used and very profitable 407 electronic toll highway, with charges based on distance driven and time spent in the congestion zone. It would provide a fairer distribution of the cost than a simple flat rate does.

There’s also the question of what exactly constitutes “downtown” or “the core” of the city, where the charge would apply. At a block away from Broadview & Danforth, I consider myself to live outside the core, in the East End. But virtually everyone I know who lives north of Lawrence or east of Victoria Park says that I live downtown, and I’ve stopped correcting them. People clearly have different ideas of where “downtown” stops in this city. Most people in my neighbourhood would bristle at the suggestions that we live downtown and that we should be within the congestion zone. But Danforth Ave and its commuting alternatives are at least as gridlocked as any streets further downtown and would benefit immensely from better traffic management. I, for one, think that my area should be included in the zone.

So if all the pieces fall into place and Toronto implements a congestion charge, how should it happen? Off the top of my head, I think it should be a multi-phase process over the course of two or three years:

I think that would give us a good start down the road to a sustainable city. With any luck, increased reliance of more people on the TTC and GO will create the political will to spend more money on those services. And that’s got to be a good thing.