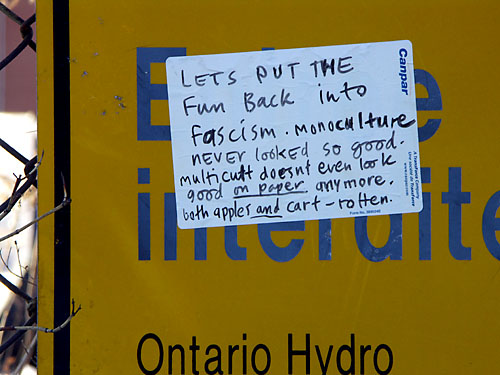 I’ve always been fascinated by the little signs, slogans, or scrawlings that people use to protest some indignity, whether real or perceived. I found this one today stuck on a “no trespassing” sign at the Hearn generating station in the port lands. No, I don’t know what it means, or why the writer chose this particular location to make this particular political statement.

The rink at Harbourfront has, together with the ice pad at Nathan Phillips Square, become one of Toronto’s iconic skating spaces. Many rinks throughout the city have captured locals’ hearts, but this is one of a very few that every winter visitor to the city should set blade to. It’s difficult for me to imagine going an entire winter without gazing at that beautiful backdrop of the harbour and islands while I stumble counter-clockwise around a rink.

Harbourfront advertises two major attributes of this pad: the size and the view. Neither disappoints. As Canada’s largest outdoor artificial rink, there’s a good deal of room for the huge numbers of people that are drawn to skate here by the beautiful surroundings. But despite its size, it always seems just a little too crowded for me. There isn’t much room to learn new tricks or do anything unexpected. If you want to land graceful axels in the centre of the ice or learn to skate backwards, you’ll probably be better off at a quieter rink. The rink itself is resurfaced regularly throughout the day, making it a pleasure to skate on.

Harbourfront is not quite the desolate wasteland that many think it is during the winter, but it is noticeably devoid of much of the life that abounds during the warmer months. The only real crowd in the neighbourhood is on the rink.

Judging by the near-complete lack of people in local restaurants when we’ve eaten there after a skate, it seems like most people drive down, skate, and drive away again. Their loss, because the winter view from Il Fornello in Queens Quay Terminal is almost equal to that from the rink itself, but without the wintry wind off the lake blowing in your face. The lack of diners seems doubly strange to me given the number of people that live in condos within a five-minute walk of Queens Quay Terminal. Don’t those people ever eat at the local establishments?

Spending an hour skating within spitting distance of the lake should be a winter ritual for Torontonians and visitors alike. Forget what you know about the inhospitableness of Harbourfront in the winter and plan to spend the day down there.

Toronto’s outdoor public rinks have suffered in recent years. Cutbacks mean that most rinks no longer have a dedicated Zamboni, instead having to share one that gets moved from rink to rink throughout the day. The result of this is that many rinks are only flooded once or twice a day, which can make the ice quality highly dependent on whether you’re skating one or twenty hours after the last ice resurfacing. Withrow falls into this category, but the rink is so little-used for most of the day that the ice is usually in good shape.

The first thing that makes the Withrow rink notable is the general absence of other skaters. I’ve been to Withrow for leisure skating a couple of times this year and have been the only person on the ice each time. The ice is a little busier evenings and on weekends, but there’s still an awful lot of room for each skater.

The second thing you’ll notice at the rink is its location in the middle of one of the east end’s busier dog parks. One end of the rink overlooks the main off-leash area that features an overwhelming array of dogs (and owners/walkers) of all descriptions who arrive, play, and leave in well-coordinated hourly shifts. It’s quite the spectacle to watch.

The standard-issue change room is nothing to write home about, and there’s a small bank of lockers near the door. The washroom is typical of other public washrooms in the Toronto park system — you may or may not get soap, paper towels, or hot water. There are no vending machines or other services inside the rink’s support building. The park clubhouse a couple of hundred metres north of the rink is usually much cleaner.

Leisure skating hours at this indoor public rink on the northeast corner of Cosburn & Cedarvale Avenues in East York are rather anemic — just two hours a week, 11:30 am – 1:30 pm on Sundays. It’s a shame, because the facility provides a high-quality full-sized skating surface without a huge number of people crowding the ice.

The rink isn’t as crowded as many of the higher-profile sites in the city, and the ice was in very good condition for our visit there. Unfortunately, we discovered that the on-site pro shop and skate sharpening booth were closed during the public skating hours, so we had to make do with our semi-dull blades. The rink and facility are both very clean and well-maintained. Many indoor arenas are built with all the ambiance of a bunker, and the East York Memorial Arena was no excpetion. But a mid-90s renovation really opened up the entrance and added a lot of space and light to the public areas of the arena, making it feel very comfortable and inviting.

As at most public rinks, the leisure skates are supervised by barely-interested teenagers who don’t really pay too much attention to what anyone is doing. A couple of kids were roughhousing a bit on the ice, getting in the way of some of the other skaters, and none of the three skate supervisors did anything. I don’t even think they noticed.