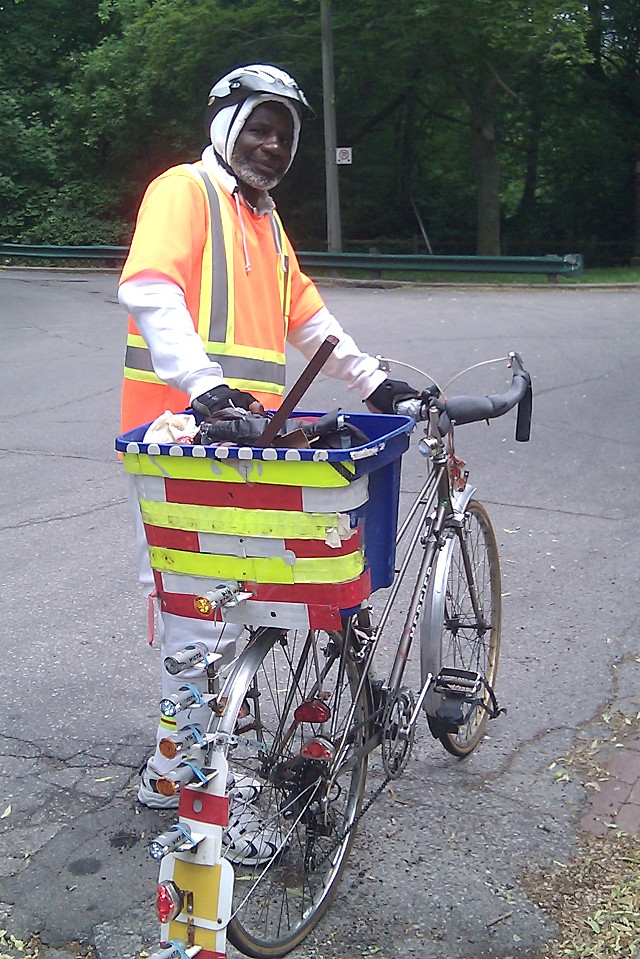 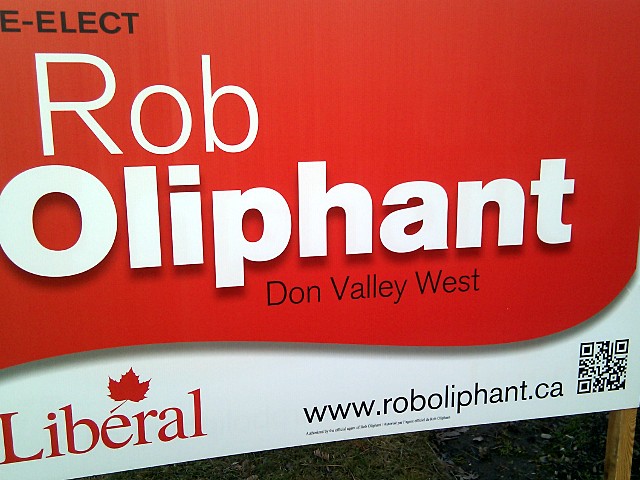 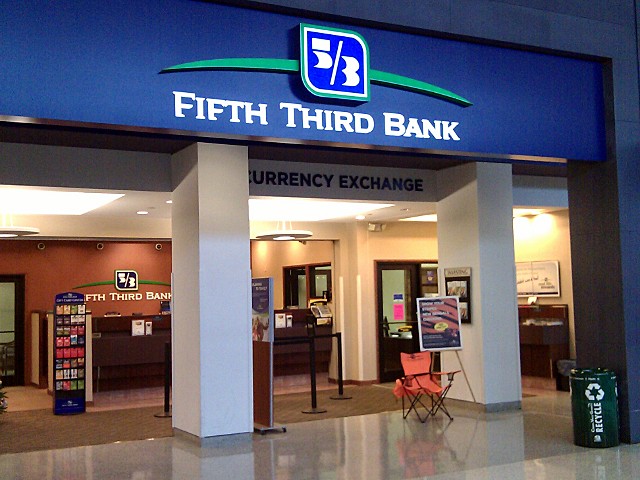 The first four Third Banks didn’t quite make it, but the Fifth one got the formula just right. 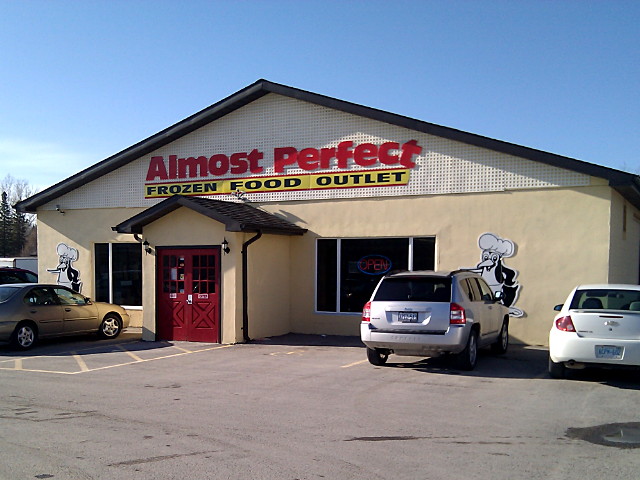 Almost Perfect‘s website says that they concentrate on producer overstocks and not, as you might think from the name, pre-loved or refurbished food. The food here has not been previously enjoyed or lady-eaten, and you’re not walking into a store filled with seconds and remnants.

This picture is of their Peterborough location (which stands directly across the street from fireplace store Friendly Fires), but fear not big-city dwellers: they do have a Toronto location.

No word on whether the Circus Lupus tickets are still available: 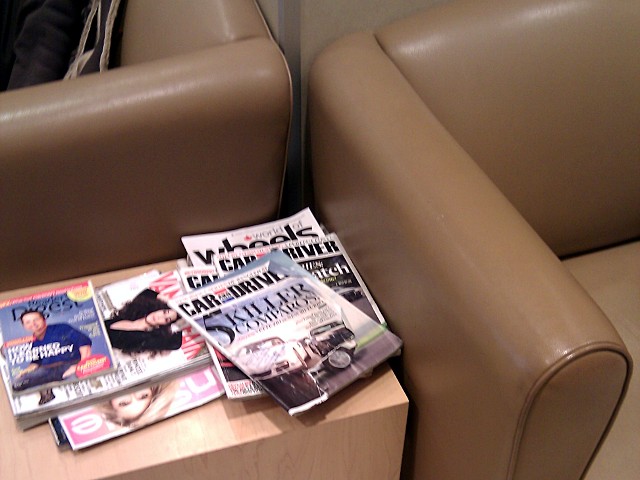 At least one Reitmans store is thoughtful enough to outfit its hubby lounge with some reading material. Unfortunately, aside from the single copies of Vanity Fair, Reader’s Digest, and InStyle, the stack of magazines is made up exclusively of old issues of Car and Driver and World of Wheels. What, no Momentum or Dandyhorse? 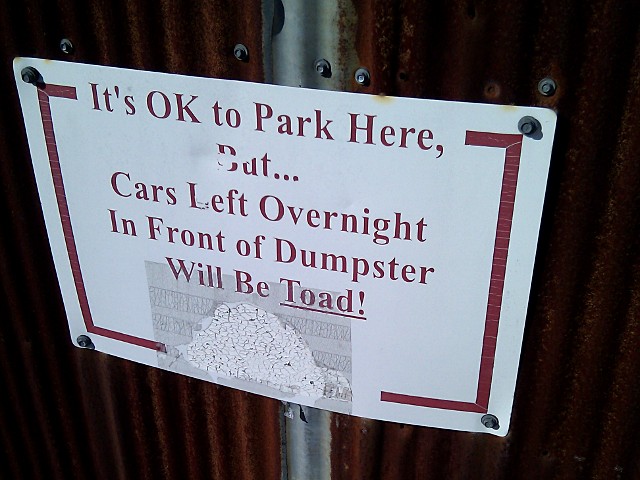 I’ve seen a lot of misspelled signs, but never one quite like this. I can’t even come up with something suitably snarky to say about it. There must be a joke here that’s going over my head. 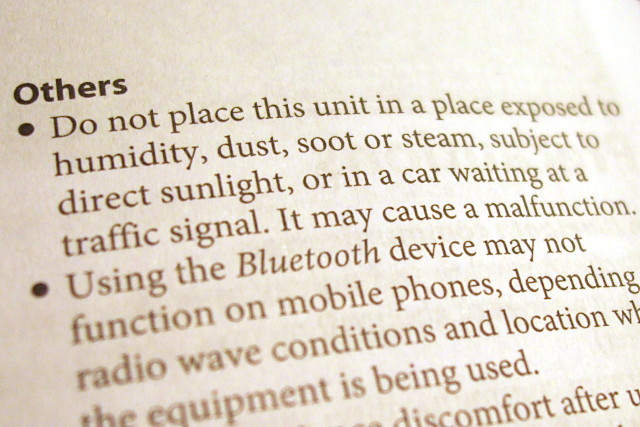 Among the various disclaimers and warnings in the manual that accompanied a new Bluetooth headset was this oddity:

Do not place this unit in a place exposed to humidity, dust, soot or steam, subject to direct sunlight, or in a car waiting at a traffic signal. It may cause a malfunction.

Huh? I’ve seen my share of odd warnings, but warning against using something “in a car waiting at a traffic signal”? This is new to me. So assuming I have this thing in my car while I go from A to B, what am I supposed to do when I reach a red light? “Yes, I saw the red light officer, but do you know how dangerous it would have been for me to stop? I have a bluetooth headset in my bag!”

For the record, Sony informed me that this is an error in the manual and it’s meant to caution against using the headset while driving. I’m not at all sure how that would “cause a malfunction,” though. Either way, I’d say that this warning is a good argument against writing owner’s manuals while in a car, whether driving or stopped at a red light. 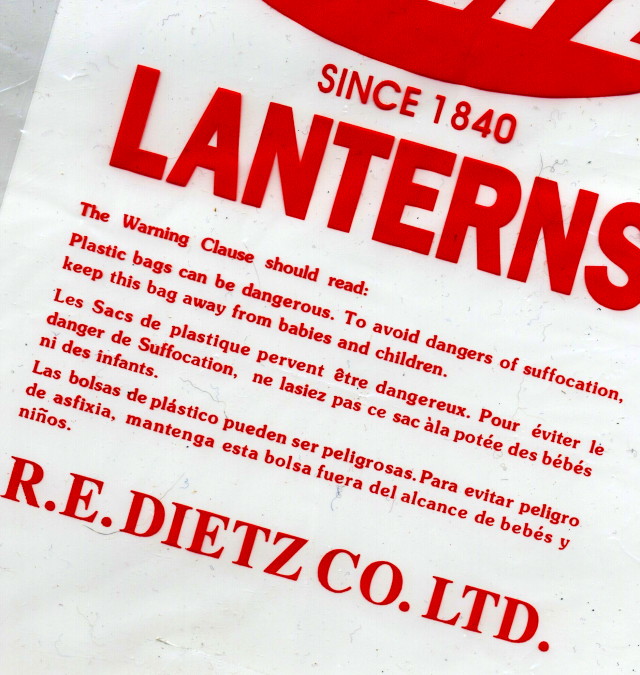 The introduction to the otherwise standard warning on this plastic bag would seem to illustrate the perils of sending an email to a translation service and blindly accepting the result. It reminds me of this prime example of a translation request gone awry, though on a much smaller scale, of course.

R.E. Dietz, famous American manufacturer of hurricane lanterns, is run out of China these days. 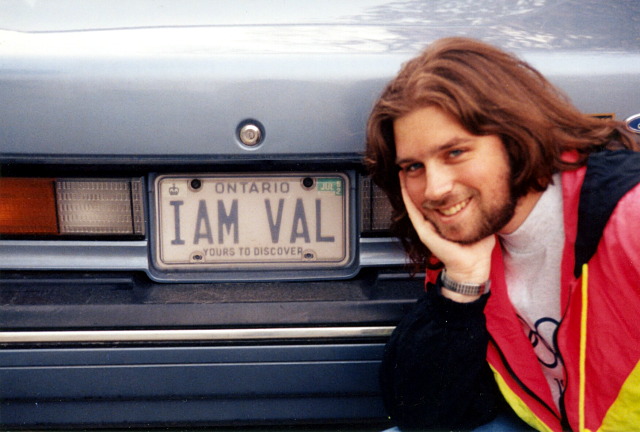 It’s funny, the things you keep around in your photo albums. See the last picture in the gallery below for the story about the photo above.

A couple of years ago, I spent the better part of four months examining every truck, tractor, piece of heavy equipment, and work site I passed, looking for warning labels. The end result was the Travails of Mr. Stickman. It was fun, but boy howdy, was I ever ready to stop looking for warning signs after I was done. Soon after I finished that project, I embarked on another: taking pictures of vanity licence plates. Two years and a few fits and starts later, here’s the result.

Compulsively looking at, taking pictures of, and remembering licence plates has an interesting side effect: it can somewhat de-anonymize people in cars. Other than the familiar ones I see on my street or parked along my regular commuting route, I don’t really think that I encounter any individual car more than once in my life. For the most part, people in cars are anonymous to everyone else, and you don’t really attach any significance to one Honda Civic versus another. Is it the same car and driver that I passed last week? Different? Does it matter?

Several times, I’ve seen the same plate twice in two completely different places. In North Toronto and on the Danforth; Deer Park and the Home Depot on Laird.  Somewhat more startling, I’ve occasionally seen the same plate on two different cars, with the sightings separated by weeks or years. I may not know anything about the owner of the car, but I do know that the complete stranger whose licence plate made me laugh on Merton Street in the spring traded in her Land Rover for a convertible that she was driving up Pape Avenue last week. Last week, I completed my first triple sighting of a single plate: first on Summerhill Avenue, then on the 401, and finally in Liberty Village.  I wasn’t able to get a picture of the car in any of those encounters. Fourth time lucky, maybe.

And then there was the driver who blasted his horn at me as he passed me way too aggressively on a wide-open street two weeks ago. As he cut inches in front of me on a quiet residential street (and signed bike route, no less), he almost certainly didn’t realize that I not only recognized his peronalized plate, but that I knew exactly which driveway it was parked in three minutes earlier, where I see it virtually every morning. The wronged cyclist’s dilemma: let him know, or let it go. I’m still undecided. 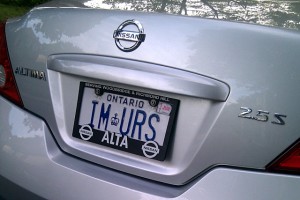 Through all of this, there was only one complaint about a guy on a bike (usually) with a camera stopping to take a picture. The vast majority of drivers that I spoke with were not only amused to be part of my project, but also told me the story behind their personalized plate. The owner of IM URS, for example, told me that he’d inherited it from his mother and it was one of the things he remembered her by. Most of the time though, the cars were empty and no one was around to tell me the personal significance of a plate.

Of course there were almost too many to count that got away, passing too fast for a picture, in weather I refused to subject my camera to, or just at the wrong time of day while I was too busy scurrying along my way. Many them were better than the ones that I did catch. Oh well. For the next post.

END_OF_DOCUMENT_TOKEN_TO_BE_REPLACED 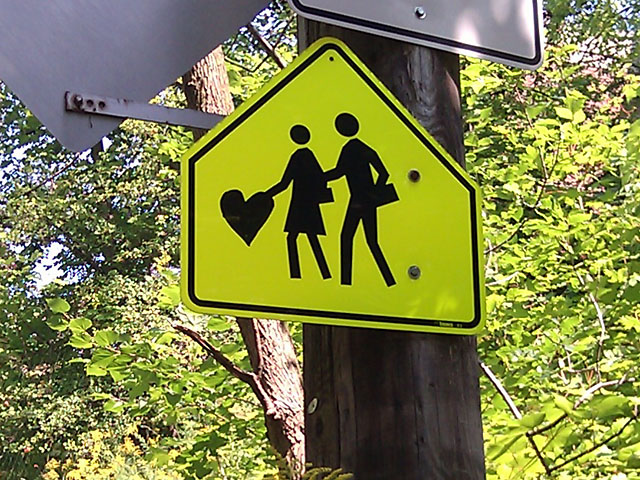 Someone’s looking forward to next week’s return to school. Spotted on my way to the office this morning.