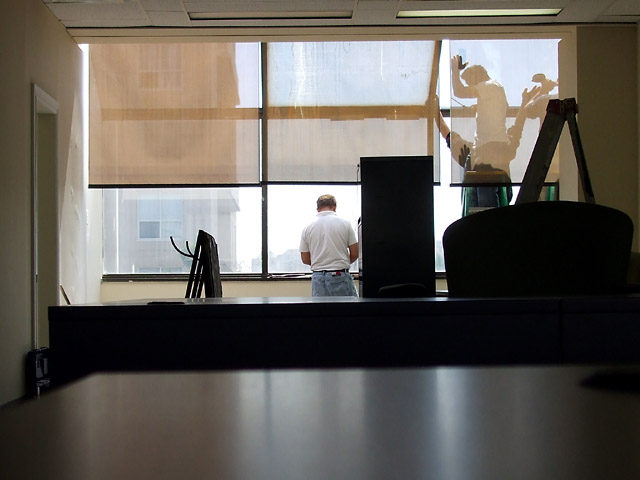 Stop! You know there are people down there, eh?

One of the members of the crew replacing a 5th-storey office window, to another member of the crew who was chipping the old broken pane out with Vise-Grips and raining little glass shards onto the sidewalk below. 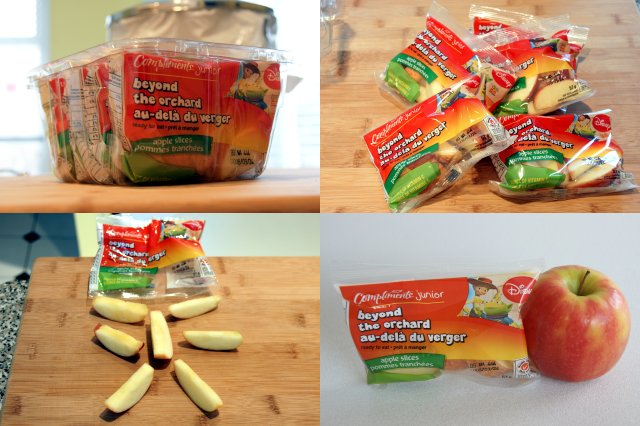 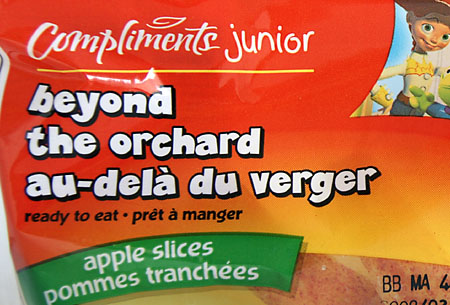 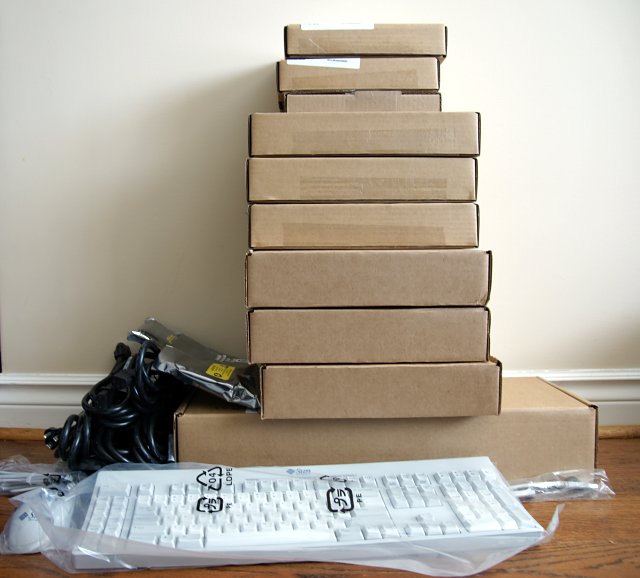 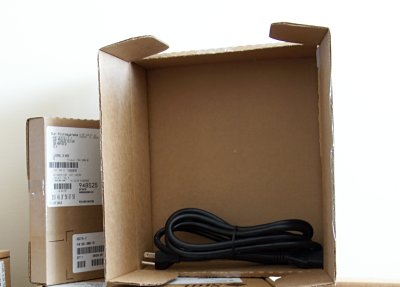 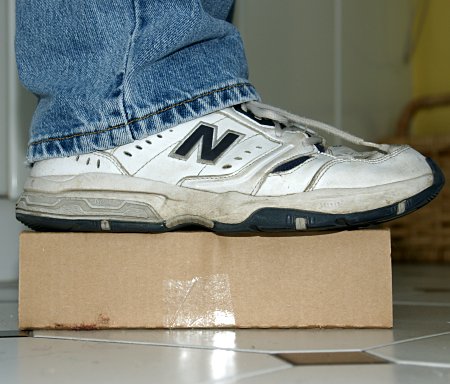 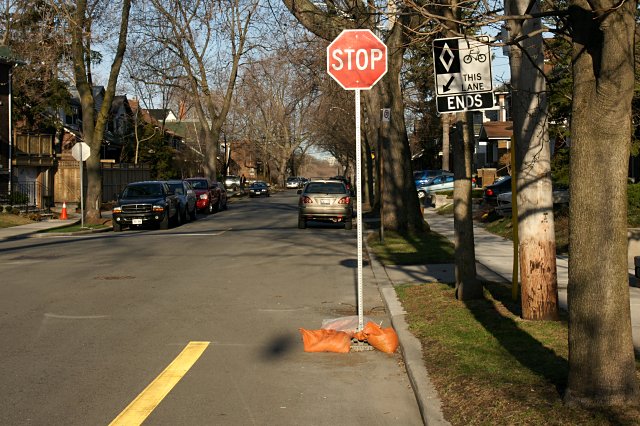 Almost five months after work started, the 70m contra-flow bike lane on Chester Hill Road may be nearing completion. The first sign of progess since the end of November came on Friday, with the erection of a temporary stop sign at the intersection with Cambridge Ave. (above) and the uncovering of the sign at the beginning of the lane. 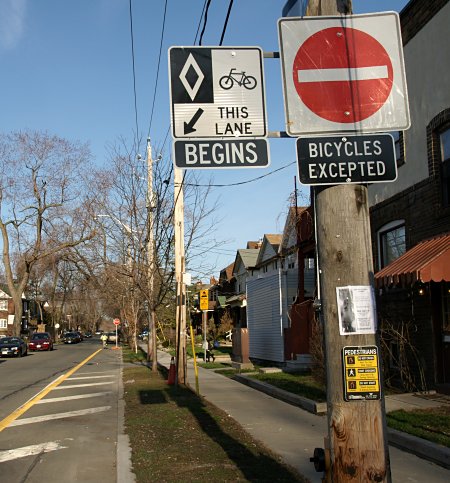 The road still needs to be stencilled, one more sign allowing southbound cyclists on Broadview to turn right onto Chester Hill needs to be installed, and a permanent stop sign needs to be mounted, but any movement is welcome after a long winter of inaction.

As I said in my earlier post, I can’t fault Transportation Services for the weather we had this winter, but I still think it’s inexcusable that virtually all the bike lane work across the city last year was left until October.

If Adrian Heaps is serious about his pledge of 50 km of bike lanes this year­—reiterated at yesterday’s Bike Union meeting—the work is going to have to start a lot sooner and be ongoing throughout the year. That this leftover stub of a lane is seeing attention so soon after the snow disappeared is promising; I really thought that it would languish well into the summer while Transportation Services focussed on fixing potholes after the harsh winter.

Cycling in the city today is about where running or jogging was 20 years ago.

Councillor Adrian Heaps on the perception of cycling on city streets as a fringe activity.

Nothing happens without a social movement behind it.

Councillor Joe Mihevc on what will drive a cycling agenda at City Hall.

Facilitator Shannon Thompson, saying that good leadership is marked by the absence of problems.

Adrian Heaps, on the prospects of the city actually meeting its bike lane installation target this year.

You had me until the last one. Once bitten…

Guy 1 (reading shopping list): “Two-by-four-by-eight? What the hell is that?”

With spring renovation season getting underway, just remember that these are the experts who will be building your deck or fixing your kitchen. Be sure to check those references. 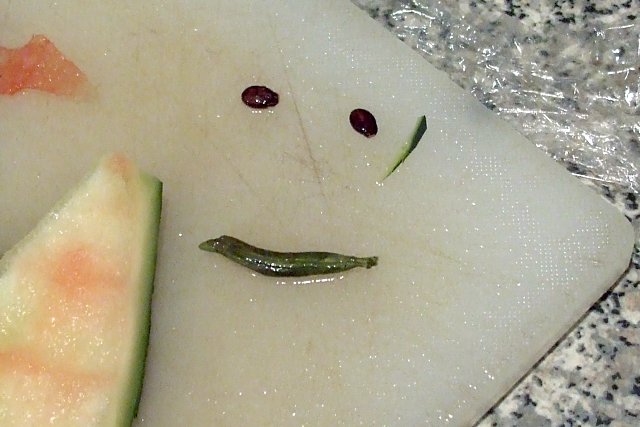 I almost felt guilty eating this watermelon last fall after noticing him staring up at me from the cutting board. Let this be a warning to vegetarians who say that they won’t eat food that had a face: by that measure, fruit isn’t necessarily safe.

I’ll add that this was by far the best watermelon I’d had in years: fresh, sweet, and dripping with juice the way I remember them being when I was a kid. It also had a zillion seeds and was grown right here in Ontario. After eating this beauty, I vowed never to buy another non-local, out-of-season watermelon again. I’ll even put up with all of the seeds if that’s what it takes to get a good, traditional melon instead of those bland, mealy-fleshed things that pass for melons in the supermarket.

I gave up on non-local strawberries years ago for the same reason: those enormous California berries look gorgeous and smell amazing, but taste like cardboard. What’s the point of having them year-round if they suck? 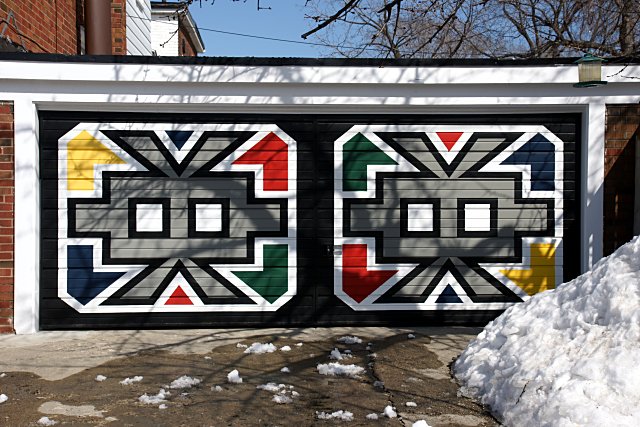 If you’re thinking about Space Invaders right now, you probably spent a lot of time exchanging $5 bills for 20 quarters in the arcades of the early 1980s. But according to homeowner Eugene Popov, the inspiration for this colourful garage door wasn’t a youth spent feeding coins into game consoles; it was a few years living in South Africa.

He took the motif from the Ndebele people of northern South Africa, who are renowned for their distinctive traditional house painting with repeating geometric patterns and bright colours. After coming to Toronto, Popov wanted a little something to remind him of his former home. So why did he choose the garage door as the canvas for his remembrance? “I had a rusty garage door,” he explained, “and wanted to do something different.”

I’m still trying to figure out how I cycled and walked past this for two years before noticing it last weekend. 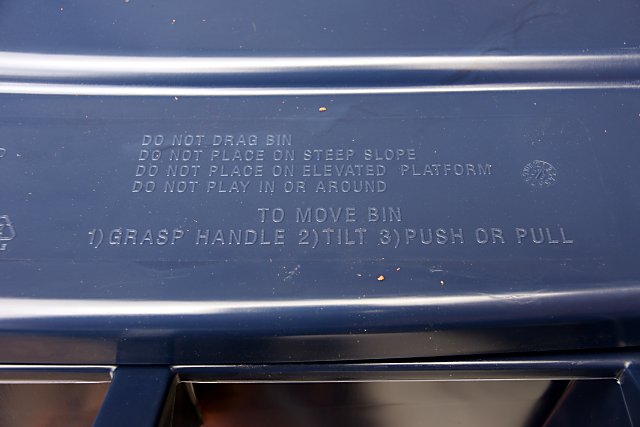 We got our new supersized blue bin today. I’ve always been amused by the instructions and warnings on everyday objects, but this one takes the cake. Apparently, someone thought it necessary to explain to the unwashed masses the physics of moving the bin from place to place.

Gee, thanks Mr. Science. I never would have figured that out on my own. Now if only they had room enough on the lid to explain the difference between pulling, which is encouraged, and dragging, which is explicitly forbidden. Oh, City of Toronto, I’m so confused. Do I put my recycling in the bin, or on the bin? Your instructions are woefully incomplete. 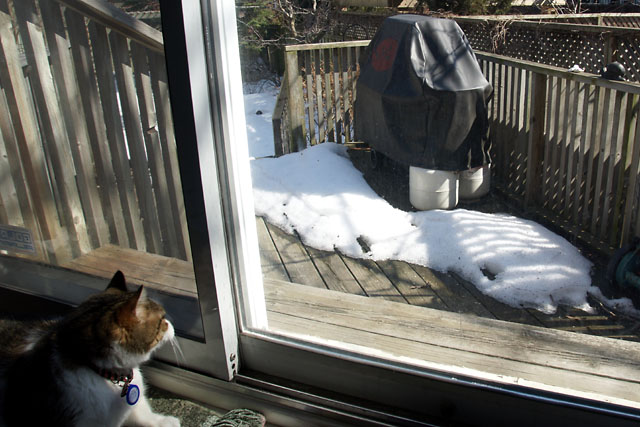 Forget spring. It’ll be summer as soon as that last bit of snow separating me (and my fellow carnivore) from the barbecue melts. I give it until Monday.